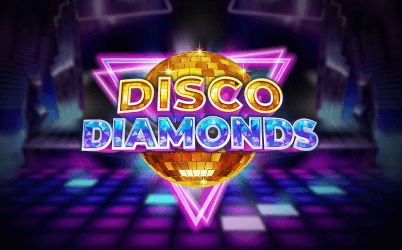 It’s time to hit the virtual dancefloor with the Disco Diamonds pokies game from Play'n GO. It’s a glitzy game with colourful fruit, BAR, and 7 symbols over 5 reels, and comes with some special features to brighten things up even further. There’s a 243 ways to win system, respins with locked wilds, a bonus wheel and free games round. The Disco Diamonds pokie machine is a high volatility game that you can play on PCs and mobiles for a wide range of stakes. You’ll find an average RTP of 96.29% and it’s possible to win a vast 10,000x the total bet, or up to a 1,000,000.00 from this colouful pokie.

Play Disco Diamonds For Free!
Bookmark It For Later 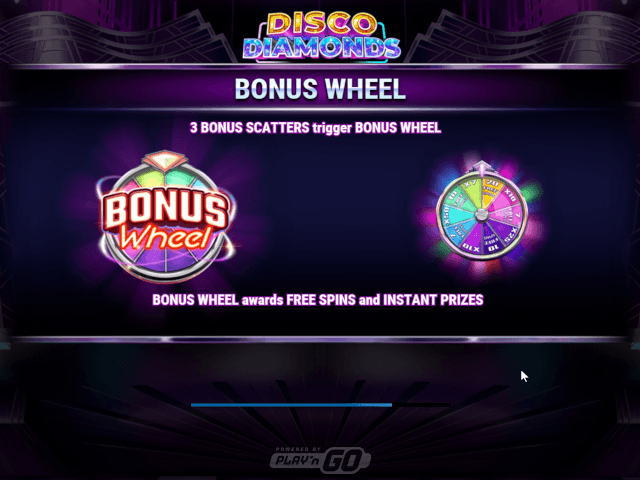 The game plays out against an Art Deco style backdrop, and sees cherries, lemons, single, double, and triple BARs and red 7s, plus sparkling diamonds on the 5x3 symbol grid. A bonus wheel is visible above, and the easy to use controls are neatly arranged below.

You can play the Disco Diamonds pokies game on PCs, or at the best mobile casinos Windows, Android, or iOS for between 0.10 and 100.00 per spin across any device, enjoying all of the same features and rewards.

Those rewards include wilds that lock in place through a series of respins and you’ll benefit from win multipliers here. The bonus wheel spins up big cash awards, or takes you through to a free spins round where you enjoy further respins and the potential for even greater multipliers.

How to Play the Disco Diamonds Pokies Game

You set stakes by clicking the values on a bar below the reels at the top online pokies sites. The wide range of options will suit most players, and it’s quick and easy to pick a level to get started, with the other controls just as straightforward to use.

The Disco Diamonds pokie has an automatic spins option, as well as fastplay mode, while the paytable, assed via the ‘I’ button, reveals how much you can win from each symbol when they land anywhere on adjacent reels from the left side.

There are 2 wild symbols in this game, with a silver glitter ball acting as others to complete combinations, and a gold ball doing the same, but also triggering a respins bonus feature. All the triggering gold wild symbols lock in place as the rest of the symbols spin, and if this creates a win, the payout is doubled. Any more gold wild symbols trigger further respins with win multipliers rising by 1x on each. The feature only ends on a spin with no gold wild, or when the whole game is filled with them.

Land 3 or more scatter symbols to activate the bonus wheel. It spins once, landing on cash prizes of 7x, 10x, 25x, or 50x your stake, or launching a free spins bonus round. You get 5, 7, 10, or 20 free games, and all wilds will be gold, with no silver ones appearing. That means you can trigger the respins feature more frequently, and at the end of any series of respins, the win multiplier stays in place, rising even further on any following series.

You’ll need to land the perfect combination of symbols and win multipliers during the respins to collect the maximum possible win of 10,000x your stake. Play with 100.00 on the triggering spin and the Disco Diamonds pokie machine pays out 1,000,000,00.

It’s a high volatility game, so don’t expect to land a win every spin, and make sure your bet level can cope with a few losses in a row. The payouts can be quite generous to compensate. On average, the return to players percentage is 96.29%.

A catchy soundtrack and sparkling symbols bring a night on the town to PCs and mobiles wherever you may be. You’ll need to be ready for the high volatility, but that certainly creates exciting gameplay as you spin for some big wins.

It’s the features that are the real highlights, with golden wild respins and the possibility of win multipliers, plus the valuable bonus wheel leading to cash prizes or an excellent free spins round. If you trigger the respins several times during the bonus games, you can build up an impressive multiplier for the greatest rewards.

Play the Disco Diamonds pokies game at the best Play’n GO sites, such as the ones featured right here at gambling.com. Our top-ranked online casinos also offer the best bonus deals to new players.