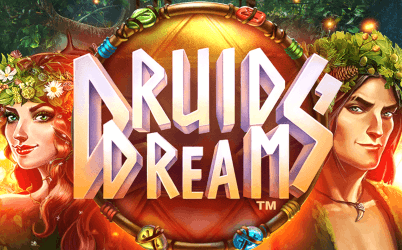 If you’re a fan of ancient history Druids’ Dream, brought to market by the capable team at NetEnt, may be the next pokie for you. This 5 reel game places players inside a luscious enchanted forest, allowing them to follow the story of two Celtic Druids who dwell there. With 40 different ways of winning, you can earn up to 200x your stake. So if you want to kick back and relax with simple gameplay, a gorgeous colour scheme and soft Celtic tunes then this pokie is a no-brainer.

Within minutes of booting up Druids’ Dream you’ll find yourself fully immersed in Celtic folkore. The game, set deep in luscious woodland, places a strong focus on calming nature and mystical tunes, providing a relaxing experience for players.

Druids’ Dream is another ball that NetEnt has struck out of the park. A lot of players enjoy the game’s serene setting, which represents a stark contrast to the flashing lights and loud noises that many other online pokies offer. Druids’ Dream is all about Wilds (we’ll explain more later), and has quickly gained acclaim among avid online pokies fans.

With 40 potential payouts, the Druids’ Dream pokie is one that can deliver often. You can play the game on Android or iPhone and of course desktop too, claiming wins of up to 200x your stake.

There’s nothing complex or layered about Druids’ Dream’s gameplay. The simplicity is a major positive and the game is really easy to get to grips with.

We found that as a mobile pokie, Druids’ Dream functioned just as well as it did on a desktop and you won’t need any experience to start playing. As is traditional with most NetEnt releases, the spin button sits center screen with the autoplay symbol to its bottom left and, on mobile, the bet amount to its bottom right. Druids’ Dream on mobile is played vertically for optimisation, while it is played in a 16:9 landscape format on desktop. The game is available on both iOS and Android devices.

You can choose whether you want the Druids’ Dream autoplay function to stop on any given win or if a single win exceeds a certain amount. The autoplay does offer stop conditions, but setting a maximum cash decrease/increase is not a requirement as it is with pokie games from other provides. If you don’t opt for stop conditions keep an eye on this, especially if you’re playing for real money at higher stakes.

To access the paytable click the menu at the bottom left of the screen and hit the information icon. Here you’ll be able to find the paytable in full, which covers Wild & Scatter, Wild Charge & Re-spins, the nudge feature, a free spins section, the symbol payout values and the winning bet lines.

During the main game if 2 scatter symbols land on reels 2 or 4 you will immediately get 6 Druids’ Dream free spins. This also applies to Re-spins. For every charged Wild symbol on reels 2 and 4 you will be given one extra spin.

How Do Druids’ Dream Wilds Work?

The wild symbols in Druids’ Dream may come up on reels 1, 3 and 5. The Wilds will appear on reel 3 during Respins and on 1 and 5 during Free Spins. Wilds can also come up as stacks on reels 2 and 4 during the regular game.

Depending on how things land, the wild symbols may come up in stacks and take up any space from a single empty pokie to an entire reel. If the wild stack stops on reels 2 and 4 together with one Scatter symbol then Respins will be activated.

Low to mid variance pokies generally don’t provide the most inspiring of paytables. In the context of the Druids’ Dream pokie, the Wolves, Owls, Drums and Whistles only pay 0.25-5 times your bet amount. You shouldn't worry about that though, because in theory you shouldn’t go too long without a win.

Druids’ Dream also has a fantastic bonus round that is triggered more often than it would be were it a high variance pokie. You should also, in theory, find yourself on the receiving end of more free spins than you would at a medium or high variance pokie.

Druids’ Dream’s return to player value (RTP) of 96% is close enough to industry standard for a low to mid variance pokie. You can, in theory, expect more regular payouts from this pokie, but remember that the RTP value is not indicative of this. RTP only asserts how much Druids’ Dream pays back to players overall - not how often you’re going to win, or how much you’re going to win. The maximum win is 200x your stake and the max stake is 400, which means that the highest amount possible Druids’ Dream can pay is 80,000.

The Druids’ Dream pokie is a lot of fun, but the lack of a progressive jackpot is one negative we can attribute to it. For those who prefer playing with jackpots we’d recommend trying out a similar NetEnt title, like Divine Fortune.

However, overall, Druids’ Dream is a fun and simplistic experience - everything that you’d expect from a NetEnt game. While the Druids’ Dream maximum win may put higher volatility lovers off, for those who enjoy a more laid-back and consistent pokie experience the prospect of smaller and more regular wins may prove more enticing. The free spins feature, which on our playthrough we found was triggered regularly, may also be an incentive for anybody who’s reluctant to play.

If you’re looking for a chilled out pokie game with an awesome, ethereal soundtrack for low-stakes play then we’d recommend Druids’ Dream. Check out Druids’ Dream now at one of the top online casino sites!