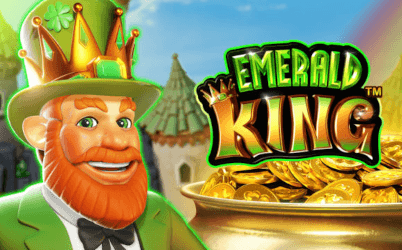 Will you have the Luck of the Irish on Emerald King, the new Pragmatic Play online pokie? Themed around famous Celtic good fortune, Emerald King fills 5 reels with leprechauns, pots of gold and classic fruit symbols. You could win 20,000x your stake from this high volatility game, with an average return to players of 96.51%. Emerald King works well on PCs or mobiles and is found at some of the top pokies sites. 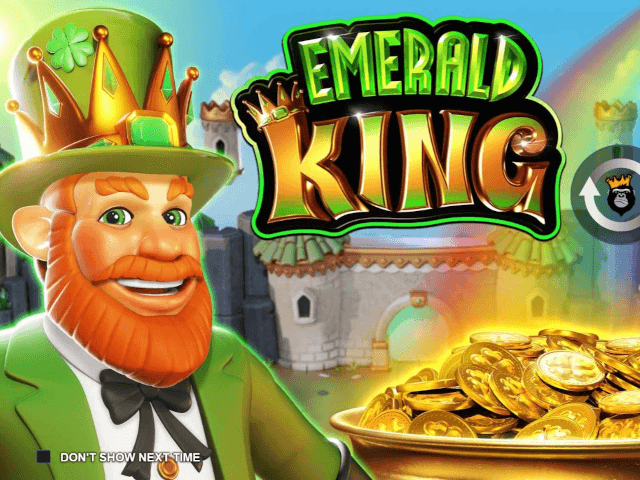 Pragmatic Play has stuck to one of the most popular topics with the Emerald King online pokie. The subject and overall design are nothing new, but some of the gameplay and features are highly original. A cheerful Irish jig plays out as the 5 reels spin, adding to the Celtic connection. The game sits against a backdrop of a castle and there’s gold trim to brighten up the screen of your PC, iOS, Android, or Windows mobile.

Symbols include a couple of Irish-themed items along with some pretty standard playing card icons such as cherries and grapes.

In Emerald King, a multiplier rises on each loss then gets applied to the next winner. Other bonuses include random 2x2 or 3x3-size symbols and free spins, where multiple 3-reel pokies can appear on the screen, each paying out wins of up to 20x your real money pokies stake. The maximum win is a vast 20,000x – at the highest bet level of 100, that equals 2,000,000 credits.

How to Play the Emerald King Online Pokie

That maximum stake is 100 credits per spin and the minimum bet is 0.20. The controls conform to the usual high standards of Pragmatic Play pokies, combining ease of use with plenty of options. You click Plus and Minus tabs to adjust coin values and set your bet. Hit the Autoplay mode if you want to spin the reels automatically without having to click a button each time.

Be sure to take a look at the paytable, accessed via the little “i” button, where you see how much each symbol is worth and you get more info on the features. The lowest paying symbol of cherries pays 1x your bet when filling a payline; the Leprechaun and pot of gold are each worth up to 25x – take advantage of our best online casino bonuses to get started.

You could be enjoying extra features from your very first spin. On every losing spin, a win multiplier rises by 1x. The current multiplier is shown above the reels and it keeps going up until you land a winning combination. The win gets multiplied by the current value, then resets back to 1x.

Giant symbols can help to complete winning lines as they cover 2x2 or 3x3 blocks on the reels. The pot of gold is a wild symbol which acts as others if it can then create a win. Reels can randomly turn green and, if all 5 go green at once, it launches a free spins round. These are not conventional bonus games, as they play out on up to 15 mini 3-reel pokies, which spin up 7s symbols. These pay between 2x your stake for any mixed 7s, to 20x for a line of red 7 symbols across a 3-reel game. These mini pokies can also appear in 2x2 or 3x3 sizes at any time.

If you land a long enough series of losing spins, followed by the highest paying combination of wilds or leprechauns, you can win 20,000x your stake. At 100 credits per spin, that’s a huge 2,000,000 prize at the best online casino sites. Emerald King is a high volatility pokie, with an equally high long-term average payback percentage of 96.51%.

Pragmatic Play and their partner studio, Reel Kingdom, have stuck with the design basics in the Emerald King online pokie but combined them with some outstanding features. The rising multipliers, giant symbols, wilds and mini pokies can all bring in some serious wins. But don’t ignore the high volatility; you might have to spin the reels a few times before clinching those all-important winning combinations.

Take a look at the top online pokies sites right here to see if you have the luck of the Irish with the Emerald King pokie machine.