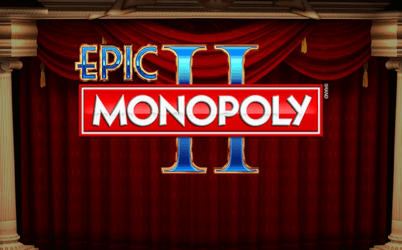 Epic Monopoly II lives up to its name by having some epic design and gameplay features. It's part of a series of Monopoly-themed pokies from WMS that you can play on PCs, Android and iOS mobiles. It has 2 sets of reels, including the Colossal set which is 12 symbols high. Each spins independently, with wilds carried across from one to the other. Play for real cash and you can win up to 250x your stake. Keep reading for our Epic Monopoly II pokie review, or play the game for real money at one of our recommended online pokies sites.

Fans of the original Monopoly board game will certainly enjoy the range of Monopoly pokies from WMS, which includes Super Monopoly Money. It's an impressive sight on desktops, iOS, or Android devices, with the standard 5x3 reels on the left joined by the 5x12 Colossal reels to the right. 100 paylines cross the game.

Bonuses include wild symbols on the left reels transferring across to the other set. The Epic Wheel feature awards free spins, win multipliers, or a trip around a Monopoly board where you collect prizes along the way.

Play Epic Monopoly II at our favourite WMS sites and it's possible to win 250x your bet in any spin, or 62,500.00 at the highest stakes.

The wide bet range and ease of operation means that no-one needs to miss out on playing the Epic Monopoly II pokie machine. Those who like to play with low stakes can wager just 0.50 per spin, but high rollers can go to as much as 250.00, and there are lots of option in between these levels for the rest of us.

The controls are very easy to use, as we've come to expect from WMS pokies, with simple arrow buttons changing stakes to suit. You have an automatic spins option and can choose the volume of the soundtrack or turn it off altogether.

Take a look at the paytable, accessed by a click on the 'I' button below the reels, and you see how much each symbol pays when crossing a line from the left side. You can also find more details on the rich variety of bonuses, including the fun and rewarding board game feature.

Familiar symbols such as the boot, car, and top hat pay smaller prizes. You win more from symbols of a man, woman, white dog and Mr. Monopoly. Look out for a bonus board symbol, as any 3 on the reels will trigger a spin of an Epic Wheel. You also win bet multipliers if more than 3 bonus symbols land at once.

You spin the Epic Wheel to unlock 1 of 3 features. You can earn up to 20 free spins, or pick from 5 Chance cards to claim a bet multiplier, more free games, or a trip around the board.

The wheel can also take you straight to the Around the Board bonus. You get between 2 and 10 rolls of virtual dice, collecting prizes and multipliers when you land in the right places on a virtual Monopoly board.

This is a low to medium variance pokie, which tends to pay out frequent prizes, but the trade-off is that wins can be quite small compared to other Monopoly online pokies. The biggest win is 250x your stake, although as we played the Epic Monopoly II pokies game, we didn't get very close to the maximum.

Overall, it returns 96.01% of stakes in winnings, which is pretty average in terms of other Monopoly pokies, but well within the 95+ that we like to see.

The Colossal Reels system has become very popular across the WMS range. The graphics are excellent, and do a great job of converting the board game to a whole new format. It can lead to lots of wins as symbols land across the 100 paylines, especially when wilds transfer from the left reels to the corresponding spots on the Colossal set.

The Epic Wheel bonuses are a little more complex, but once triggered, it all becomes clearer, so even players with little experience of pokie machines won't find anything too daunting here. Once you start triggering the multipliers, and heading off Around the Board, the wins can really mount up.

If you like the Colossal Reels format, but want to try a game with a different theme, then Spartacus: Gladiator of Rome is another WMS online and mobile pokie that uses the same system. You will find both games at our top online casinos, so experience Epic Monopoly II at the sites we've carefully selected.