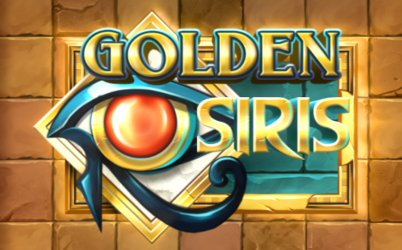 Play Golden Osiris For Free!
Bookmark It For Later 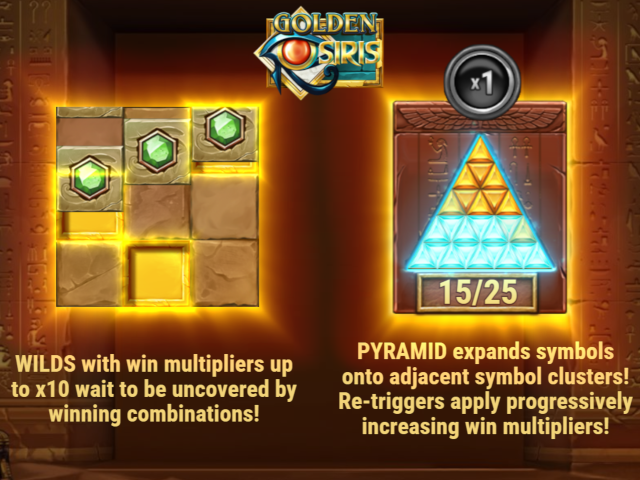 Play'n GO haven’t taken any risks with the design of the Golden Osiris pokie machine, and fans of Ancient Egyptian games will certainly appreciate the pleasing images of gods, gems, and the scarab beetle used here. They all appear on stone-effect blocks against a backdrop of columns and hieroglyphics, deep within a dark tomb.

A mysterious pyramid sits to the right of the reels, waiting to trigger one of the bonus features, and the user-friendly controls run along the bottom of the screen. It looks just the same on PCs, Android, or iOS mobiles, with a little of the background image cropped for a better fit on smartphones.

How to Play the Golden Osiris Pokie Machine

The standard Play’n GO control panel is featured in this game, as it’s proven to be both simple to use and flexible enough for everyone. You select bets between 0.10 and 100.00 per spin from the scrolling bar at the bottom of the game, and there are other buttons to trigger automatic spins and fastplay options.

Be sure to check out the paytable before playing, as this reveals how much each symbol pays out when you land groups of the same type on the grid, plus it has further details on the bonuses, such as symbol transformations.

The popular and potentially rewarding Cascading Wins system removes winning symbols from the grid allowing new ones to drop down from above, This feature runs until no new winning clusters appear, and there’s no maximum to how many cascades, and wins, you could get in a series. Wild symbols can appear in a cascade, acting as others, and applying a multiplier of up to 7x on any subsequent win.

Each winning symbol removes one of the 25 sections on the pyramid to the right of the reels. If you manage to clear all section in a series of cascades the pyramid opens up to reveal a random symbol and all examples of it on the reels will turn adjacent ones into copies of itself.

This can create a new win, triggering more cascades which could even clear the whole pyramid again. If you manage to remove all 25 sections in this series of cascades, any wins get tripled in value. Multipliers rise to 6, 9, 12, and so on, all the way up to a maximum of 30x if you clear the pyramid again and again from the same series of cascades and symbol expansions.

Three or more Eye of Horus scatter symbols award 5 free spins of the Golden Osiris pokies game. The pyramid reveals a high value symbol each time, so you could grab some big wins in this round. If at least 3 scatters appear in a free spin, they retrigger the whole feature.

With the perfect blend of symbols and multipliers, you can collect a massive prize of 12,000x the total bet. Play with 100.00 on the triggering spin and that makes you an instant millionaire with plenty of change left over.

Golden Osiris is a high volatility pokie with average returns of 96.27%.

Play’n GO have got a sure-fire hit on their hands with the Golden Osiris pokie machine. It looks impressive on PCs and mobiles, has a wide bet range to suit all budgets, and comes with some great bonus features.

In the base games, you won’t always clear the pyramid to trigger symbol expansions, but it’s during the free spins feature that it becomes much easier to claim bigger wins.

If you like Egyptian themed pokies (and judging by their popularity, most of us do), then head over to the best online casinos, with the biggest welcome bonus packages to play the Golden Osiris today.