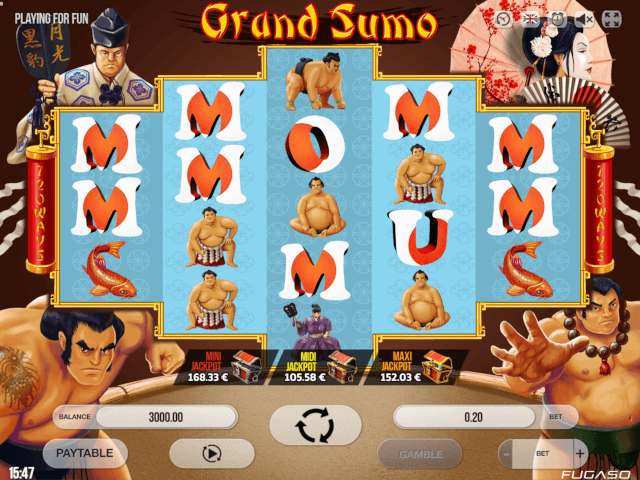 Available on computers and all mobile devices, you can enjoy this Sumo-themed Fugaso game wherever you go. Apart from its lucrative symbols, what makes Grand Sumo an enticing pokie game is its set of extra features, which includes free spins games, gamble functions, and three progressive jackpots that can be won any time. Read on to learn more about the features hiding in this pokie or try a free demo of the game to check them out personally.

How to play the Grand Sumo pokie game

It doesn’t matter if you’ve never tried a pokie machine before, Grand Sumo will be quite easy to play. Before you start spinning away, you just need to use the bet buttons on your right to choose the size of your total bet. The minimum bet is only 0.20 credits per spin, but if you want to bet more you can also pick from a number of larger bets, up to a maximum of 30 credits per round. Once you choose your preferred bet size, just press the spin button for manual gameplay or set up the Auto controls to kick back and have the game spin automatically.

You have 12 different symbols to bank prizes with while playing and all of their payouts are shown in credits. When playing for real money with the minimum stake, prizes will start at 0.02 credits for a three-of-a-kind combination and go up to a maximum of 10 credits for five matching symbols. When playing with the max bet, however, you’ll get payouts ranging from 3 credits to 1,500 credits per combination. One unusual thing about this pokie machine is that you won’t’ have to collect matching symbols on a payline to trigger prizes, thanks to the pokie's 720-ways mechanics, which are explained further below.

Grand Sumo can also be played on any mobile device at the best mobile casinos, allowing you to make a profit even when you don’t have access to a computer. In fact, all of Fugaso’s pokies are built in HTML5, which makes them compatible with almost all Android and iOS tablets and smartphones. To play on your phone, just turn your device sideways to landscape mode and touch your screen to begin.

Prizes in the Grand Sumo pokie machine can be collected only when you get at least three identical symbols to fall on three or more adjacent reels, starting at the first reel on the left. The positions your matching symbols occupy don’t matter at all, as long as all of the same symbols are found on adjacent reels. This special feature gives you 720 ways to trigger prizes during any given spin.

Helping you make big wins happen when playing with real cash will be the sumo wild symbols, which substitute for any other symbol bar the bonus symbol to complete your matching combinations. Another special symbol you’ll be anticipating during every spin is the rice bowl bonus symbol which pays the highest prizes in this pokie and triggers the bonus games. When three or more of the symbols are collected during a round, the pokie will award you with 5 free spins which can also be retriggered once the feature starts. Another plus you get during the free spins is that that the wild symbols will only appear on the third reel, helping you form stacks of wild icons to complete your payouts.

Other than these bonus features, the pokie also comes with a gamble function and three progressive jackpots that can help you earn even more while playing. The gamble function can be accessed through the special “gamble” button after a prize is triggered, which will take you to the pokie’s double-or-nothing game. As for the jackpot, it comes in three tiers (Maxi, Midi, and Mini) and it can be won during any spin, no matter your stake.

Prizes of up to 1,500x can be triggered when playing for real money in 720 different ways, while the jackpots and free spins games are only another plus you get. The RTP of 96.1% is about the norm for modern online pokie games, but the game still has plenty to offer. However, the higher hit rate also implies that big prizes won’t be coming frequently, so don’t be surprised if they don’t.

Grand Sumo by Fugaso is one more pokie game from the studio that can speak to many different pokie players, particularly punters on a budget. If you prefer playing medium-volatility pokies that can produce consistent payouts to keep you playing longer, Grand Sumo could give you what you need.

If you want pokies that offer bigger returns with an increased dose of risk, you can try some of the high-variance games from Fugaso. Book of Tattoo is a popular pokie from the studio that offers risky playing, an extra 6th reel, and payouts of up to 7,500 coins for five matching symbols. For a volatile pokie with plenty of stimulating bonuses, however, you can also try Crazy Bot, which features cascading reels, free spins games, and payout multipliers with a max value of 15x. To try out any of these games for real cash, you can check out some of the top-ranked online casinos on our website where more great pokie machines and solid player bonuses await.