Play Nordic Heroes For Free!
Bookmark It For Later 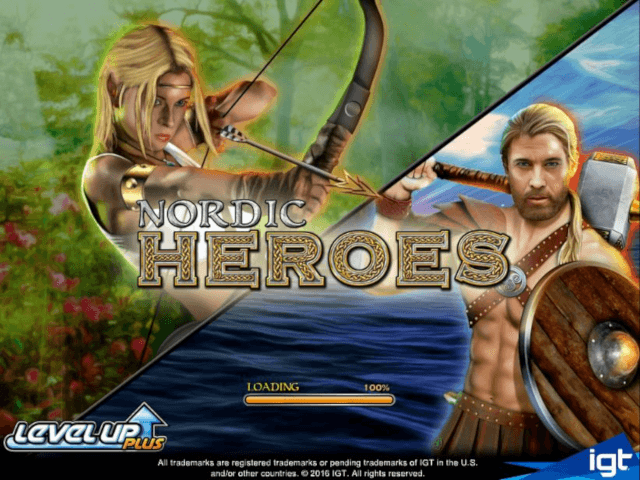 If you don’t know your Odin from your Odr, or Thor from Thrud, then perhaps you should take a look at the Nordic Heroes online video slot from IGT. This is an epic adventure that’s presented in stunning detail across 5 reels and 30 paylines. Nordic Heroes uses the thrilling Level Up Plus format that has become so popular across a number of IGT slot machines. You move through several levels, triggering different bonus games as you rise from a lowly Wanderer, to the ultimate status of Champion.

This unique game has become one of the biggest success stories for IGT. You can play it on a desktop computer, iPhone, iPad, or Android mobile from just 0.30 per spin. That makes it a great slot for low-stakes players, but the top wager of 600.00 should satisfy the high rollers amongst you. A truly heroic prize of 249,600.00 can be claimed at the highest bet level, but there are lots of chances to claim more modest wins along the way.

Bonus features such as wild substitutions and free spins are included, but the Nordic Heroes online slot has so much more to enjoy as well. New symbols, new features, multipliers and battles are all encountered on your quest for winnings. Check out the free-to-play version here or read on to see how this incredible game can make you feel like a real hero.

Although this game takes you on an adventure, you don’t have to complete the journey in one session. The software remembers your IP address, so you can dip in and out of game as you wish and progress over as long as you want. Having said that, this is a slot machine that you will want to keep on playing, as the stunning design and thrilling gameplay are something quite special.

IGT have used their standard control panel in the Nordic Heroes slots game, which makes it easy to get started. All 30 paylines are always active and with a stake of just 0.01 per line, you are looking at a minimum of 0.30 per spin. Other controls spin the reels automatically for up to 50 times and you can choose the volume level to suit.

Before you get started however, it’s worth pointing out that this is a complex slot machine. If you click the Paytable button below the reels, you will find 25 pages of information about how it works, what bonuses can be awarded and how you progress through the 8 levels. Don’t panic though, as once you start playing, it all becomes quite clear.

Take it one step at a time and start claiming basic wins when 3 or more matching symbols line up from left to right on a payline. Then as you progress through the levels, keep checking the paytable to see what extra rewards are now offered.

Nordic Heroes sets the reels against a forest backdrop, but it’s the detailed symbols that will really grab your attention. Lower-paying symbols include coins, berries, mushrooms, hawks, arrows, wolves and a big hammer. The top prizes are claimed when the beautiful Thora, or handsome Ragnar characters appear. Ragnar is a spitting image of Chris Hemsworth in the Thor movies, but we’re sure that’s just a coincidence. Maybe.

A special wild symbol is the most valuable of all, acting as others if needed to complete a combination and paying out 1,500x the line bet when it lands right across a payline.

You won’t meet Ragnar yet, as the Level Up Plus system only introduces Thora when you start out at Wanderer status. You earn ‘XP’ points every time a Battle Bonus is triggered. Thora fights a monster and you move up a level. Ragnar makes an appearance from level 3 onwards and you can then choose to play as either character.

From the Defender level, you can decide to play in the Sea of Glory realm, where you will find random wild reels in each spin, or stick to the Forest of Fortune, where roaming wilds can appear. Rise through the ranks to Champion level to be awarded extra weapons, which make it easier to defeat monsters and collect your rewards.

The Nordic Heroes online slot is aimed at players who like interactive games or are used to playing on consoles. It’s all about the Level Up Plus format and claiming extra symbols, battling monsters, earning free games, multipliers and other treats along the way. But the complexity could put some people off. We found that once you start to play, it all becomes much clearer and by the time you have fought a couple of battles, and risen up a level or two, everything is very easy to follow.

Nordic Heroes is a low to medium volatility game, which tends to pay out lots of lower-value prizes rather than fewer, higher-paying ones. The return to player percentage is 94.68%, which is about average for an online slot machine.

If you like the subject but want less complex gameplay, be sure to take a look at Dragon Ship, from Play’n GO. This Viking-themed game has a free spins round where expanded wild symbols lock in place, and a simple prize-picking round, but apart from that, it’s fairly straightforward.

You will find the Nordic Heroes slot machine at some of the top online slots sites, so start your epic adventure today.