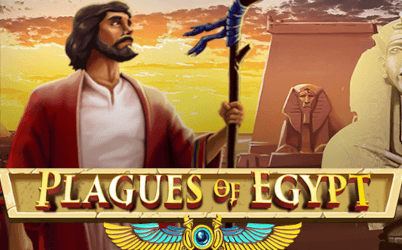 Play Plagues Of Egypt For Free!
Bookmark It For Later 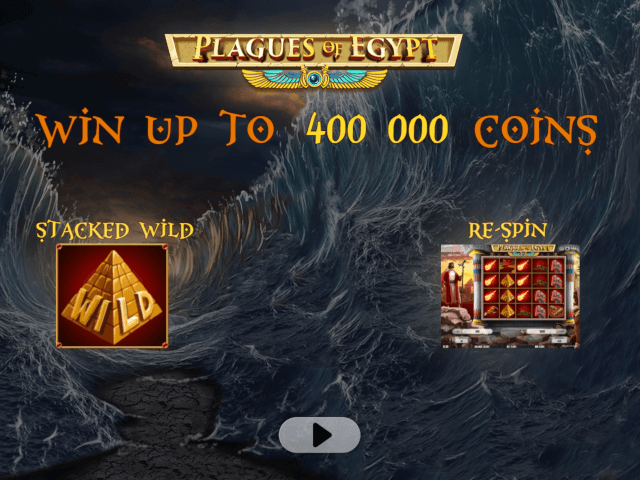 Play Free Demo
Version Directly in Your Browser
Play Plagues Of Egypt For Free!
Bookmark It For Later

One of the most entertaining online pokie in Fugaso’s game collection, Plagues of Egypt will give you a free lesson in the Old Testament while paying out big cash prizes. Inspired by the Book of Exodus, this epic pokie game features 5 reels and 4 rows of biblical symbols which are matched with an exciting soundtrack that’ll set you in the right mood for playing. There are prizes of up to 400,000 coins to be triggered on 40 fixed paylines when playing this pokie for real cash, and they can be claimed on any device, be it a smartphone or a laptop.

How to Play the Plagues of Egypt Online Pokie

Plagues of Egypt by Fugaso is a very straightforward game that can be played easily by both seasoned punters and those with no online pokies experience whatsoever. The clear bet controls on both sides of the screen let you choose the size and number of your coins while the AutoPlay and spin controls let you play manually or automatically. The bet limits start at a minimum of 0.40 credits for punters on a budget and they can amount up to 200 credits for a spin.

Once you start playing, you won’t be able to see the paylines during a round but only when you open up the paytable hidden under the “i” button. The pokie has 11 symbols that can pay prizes, the payouts of which are given in coins only. When you play Plagues of Egypt at a real money casino, you can bank payouts of 2 to 1,000 coins per sequence and that’s only with one coin per line. If you bet the maximum number of coins (10), however, you can see even better returns, up to 10,000 coins for a five-symbol combination. Furthermore, the pokie also has an unusual respin feature which gives you a second try after banking a prize to make the most out of any collected win.

For mobile casino players, there’s also a mobile-optimized version of the game that features stripped-down screen controls. You can play this game on almost all iOS and Android tablets and smartphones but mostly in landscape mode. While playing on a phone, you can spin both manually by using the spin control as well as automatically for when you want to take a break from holding your device.

Like most pokie machines, Plagues of Egypt pays only when you form a sequence of three or more matching symbols on a given payline, starting at the leftmost reel. The more matching sequences you get on your screen, the more money you’ll be able to collect per round. The symbols that can pay the best returns when you play for real money are the pharaoh and pyramid symbols, which pay up to 400-1,000 coins per sequence. Another symbol that can add more value to your rounds is the pyramid wild, which substitutes for all symbols in the game to complete a paying combination but only appears on reels two and four.

Any round you play in the Plagues of Egypt pokie will also make you eligible for one of three progressive jackpots prizes. Each jackpot is pooled with a portion of every bet you place on the game and each of the prizes only grows bigger with time. And the best part is that you can win any of the jackpots randomly, even when betting the minimum bet.

Apart from jackpots, this pokie also has a bonus respins feature which is activated by any winning spin. The bonus respins take the winning symbols that triggered a payout and add them stacked and multiplied on the next spin to form even bigger winning combinations. If a high-value symbol triggers the feature, you can end up filling up your bankroll with some big chunks of cash.

With its medium-variance gameplay, this pokie is capable of paying varied returns when played for real cash, both big and small, giving you a middle ground between low- and high-volatility pokies. However, don’t hope to see colossal payouts often enough because Plagues of Egypt still comes with a higher hit rate. The RTP is a respectable 95.8%, while up to 400,000.00 can be won from a single spin.

Plagues of Egypt brings all the things players love in Fugaso’s pokie machines in one epic and mobile-friendly package. If you like simple online pokies that offer big payouts and high-limit betting, you’ll want to put this game on your list.

For players who don’t mind taking a bigger risk to pursue bigger payouts, Fugaso also makes more than a couple of volatile pokie games which are just as entertaining. Check out the Book of Tattoo for a 6-reels online pokie with higher top payouts or try the Mummy 2018 for a game with a similar theme but also a whole array of bonuses to enjoy, including the same progressive jackpots. Feel free to head down to some of our top-ranked online casinos for a chance to try these pokies out and claim exciting welcome bonuses after you create an account.