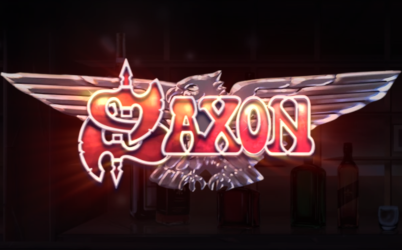 Saxon is an online pokie machine from Play’n Go themed around the legendary British rock band. It’s a high volatility game that stars vocalist Biff Byford across 5 reels and 10 paylines. Average returns of this PC and mobile-compatible pokie come in at 96.24%, and there are plenty of bonus features to add excitement to the gameplay. Stacked symbols increase win multipliers, and wilds fill entire reels to help complete combinations. During a free spins round, multipliers keep rising until the end of the feature.

Play Saxon For Free!
Bookmark It For Later 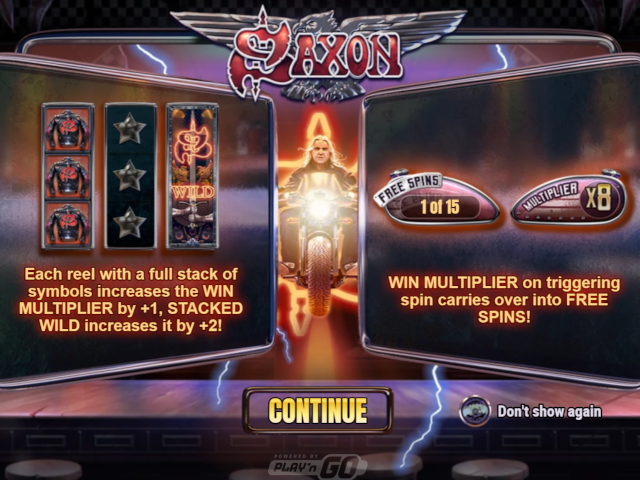 Play Free Demo
Version Directly in Your Browser
Play Saxon For Free!
Bookmark It For Later

Saxon formed in 1977 and are still going strong. The Saxon online pokie from Play’n Go is a brand-new offering. Fans of the band will be able to play any of 8 Saxon songs as the reels spin, including classics such as “Wheels of Steel,” and crowd favourite, “747” (Strangers in the Night.) Along with images of Byford, you’ll see symbols of a classic motorbike, helmet, leather jacket and the band logo.

The 5 reels and 10 paylines combine with a high volatility for potential big wins. You can win 10,000x your stake here, which adds up to a cool 1,000,000.00 at the maximum bet level. The wide bet range will attract fans who have never played pokies, as well as highly experienced players looking to exploit the innovative features and high winning potential.

A wild symbol acts as other to complete combinations for you. Stacked symbols are the key to the big wins, with each adding a multiplier to any prizes. Trigger the free games and those multipliers keep on rising.

How To Play Saxon Online Pokie

Play’n Go pokies tend to use a standard control panel that’s easy to use, but still offers plenty of options. A scrolling bar along the bottom features the bet levels, which run all the way from just NZ$0.10 per spin to NZ$100.00, like many other top real-money pokies, with lots of options in between.

The autoplay mode sets the reels spinning on their own, and you have the option of playing the Saxon pokie on a PC, iOS, Android, or Windows mobile device.

Click the musical note to open a list of Saxon songs, and press the ‘I’ button to open the paytable, where you see how much each symbol is worth. Playing card suits pay the least, and the Saxon logo returns the highest prizes. It’s worth 50x your stake when crossing a payline, but because it’s a stacked wild symbol, it fills reels and also stands in for others to complete winning lines.

Stacked symbols create bigger wins for players on this game at top online pokies sites. For each reel filled with the same type of symbol, a win multiplier increases by 1x., so if you land fully stacked reels of the same symbol to get a 5x multiplier. Each stacked wild boosts a win by 2x, potentially leading to some huge payouts.

Biff Byford on a reel at the same times as the symbol of him riding a motorbike will trigger between 5 and 15 free spins. During this round, stacked symbols still multiply any wins, but the multiplier doesn’t go back down after the spin. If you land several stacked symbols throughout the free games, the multiplier keeps on rising. You can also retrigger the bonus spins by landing Byford and the bike in a single free game.

The Saxon pokie machine comes with a high volatility, where it’s possible to see significant gaps between winning spins, but the flip side is that prizes can be high in value. As a long-term average, Saxon pays back at a rate of 96.24%, which is about what we expect from Play’n Go pokies.

This exciting game isn’t just for fans of Saxon. The generous bet range opens it up to players on almost any budget, and the bonus features are enough to appeal to anyone. Stacked symbols are the way to the biggest wins, especially if you land the wild, which is always stacked on reels.

Ever-rising multipliers in the free games can lead to some great wins form this PC and mobile compatible game. It joins several other rock-themed pokies from Play’n Go, including the Annihilator online pokie and the Twisted Sister online pokie.

Take a look at the top-rated Play’n Go sites here at gambling.com to see which ones offer the biggest choice of games and top welcome bonus offers.