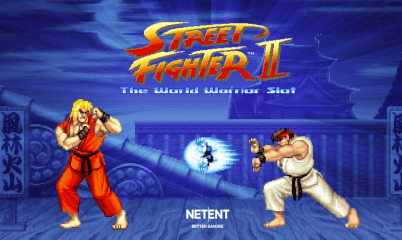 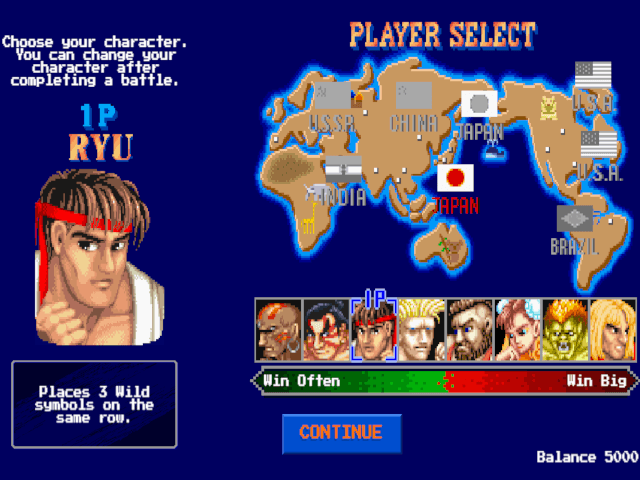 The Street Fighter II video game was a huge hit in the 90's, so it's no shock that it would eventually find its way to the world of online pokies.

Following in the footsteps of other video games to take that leap, such as Hitman (which was released by Microgaming), we now have Ryu, Ken, Blanka and co. available in a new pokie game in 2020 – this time fighting to win pokie players some real money.

The 5x5 grid and cluster pays are designed with classic Street Fighter graphics, making it feel like you're playing the video game. Being designed by NetEnt – one of the world's biggest and best pokie game makers – you can be sure of a smooth gameplay experience too.

How do I play Street Fighter II: The World Warrior Online Pokie?

The stake range on the pokie game may vary based on where you play it, but you'll likely find that the minimum bet is 0.20, while the maximum is 700.00. The stake can be changed in the bottom left of the screen, beside the menu button. Clicking on the menu button gives you access to the paytable, which lists the winning amount for various symbols and various cluster sizes. A breakdown of the Avalanche feature can be found here too.

Like all top NetEnt pokies, Street Fighter II: The World Warrior is available on all mobile devices, so whether you're using a tablet, Android or iPhone, you'll be able to play this game while on the go at any top NetEnt casino.

The final bonus feature in the Street Fighter II pokie game is the Insert Coin Gamble Feature, which is available when a boss defeats you, thus ending the bonus round. Much like in the arcade version of the video game, it gives you another chance to defeat the boss and keep on progressing. You can restart the battle you just lost by forfeiting the winnings you accrued during the feature. Alternatively, you can end the bonus feature by taking your winnings.

The RTP in the Street Fighter II: The World Warrior Pokie is set at 96.06%, which is roughly what we've come to expect from online pokie games. Payouts can go into seven figures in the game too. Given the amount of bonuses and free spins on offer, as well as the relatively high volatility, playing for real money could end up being a very rewarding decision.

This is an excellent pokie game and one which is sure to prove hugely popular with online pokie players. Clusters pays can be a little daunting for new pokies players, but a familiar theme in the shape of Street Fighter will make it a lot easier for some to get used to it.

If you're unfamiliar with the Avalanche feature in this game, you can try it out in a lot of NetEnt's top games, such as the Asgardian Stones online pokie.