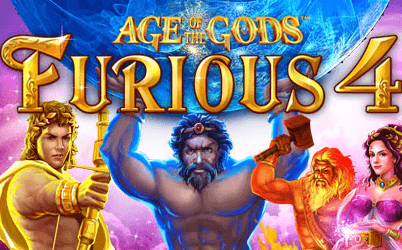 In fact, it's the 'power' progressive jackpots that really make this game stand out. Capable of striking like a bolt of lightning at any time, these prizes not only make this one of the most accessible jackpot slots in the industry, but give you the chance to win upwards of £100,000!

About Age of the Gods: Furious 4 Online Slot Game

Despite the emotional state of the gods involved in this game, you'll be anything but furious when you load up the interface. Gilded reels, blue skies and expanding symbols that come to life as you roll in wins make this a slot that's a treat to behold. Indeed, in line with the divine theme, 'ornate' is the word you'd use to describe the look of Age of the Gods: Furious 4 slot.

Five reels and 20 adjustable paylines house a selection of symbols that range from card icons to four heavenly creatures. To set these reels in motion, you'll first need to select the number of paylines you want to activate and then click the line bet option between 0.01 and 25. These two figures will then be multiplied to give you an overall spin cost of between 0.01 and 500 units.

Regardless of the stakes you play for, the Age of the Gods: Furious 4 online slot has the power to reward you handsomely for your time online. All fixed prizes are based on line bet multipliers and range from 5x to 10,000x your stake. So, even if you're a small stakes player, you'll receive the same return on your investment as a high roller. Beyond the fixed prizes, three or more scatters (golden thrones) will unlock 12 free spins and one of the following 'furious' enhancements:

To give Age of the Gods: Furious 4 a final layer of shine, you can win a progressive jackpot regardless of the stakes you're playing for. Thanks to a clever system, you could be spinning for high stakes or low stakes and the jackpot game will kick into life whenever the gods feel you're worthy. If you're lucky enough to enter the Gods' Grid, you'll have to uncover mystery symbols from a 5x4 box and match three to win one of the following jackpots:

These jackpots can also be experienced on sister slots like Age of the Gods: Fate Sisters. Depending on the one you unlock, you could bank a prize worth a few hundred up a few hundred thousand pounds. That's right, for as little as £0.01, you can take home an Age of the Gods: Furious 4 jackpot topping £100,000! So what are you waiting for?