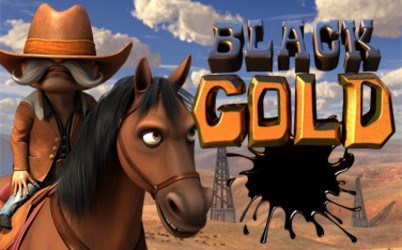 A true BetSoft slot machine, the Black Gold slot takes all that players enjoy about the studio's games and puts in a mobile-friendly package you can take anywhere with you. From its 95% RTP to various bonus features this medium-variance slot offers, there's some real potential to strike black gold with this slot game! Before trying it out at one of our recommended online casinos, read all about it in our in-depth Black Gold slot review.

Original characters, 3D animations and graphics, and a nice collection of bonuses are all featured in this 30-paylines slot inspired by the old oil tycoons of the west. Use real cash to play it and you can look forward to a variety of prizes, up to a max jackpot of 300,000 coins per round!

As you can expect from any slot by the studio, Black Gold offers lucrative extras that will lure you into playing. Starting with the auto respins and prize multipliers that follow any payout you win and going up to click-me games, free spins, and high/low cinematic bonus features, you'll have plenty of chances to get some free prizes while playing this game.

Giving players total power over their bets has always been BetSoft's motto and this is another slot machine that proves it. Other than being really easy to set up, Black Gold also comes with three controls for your stake: one for your coin size, another for the paylines, and one that controls your bet per line. Tweak these settings to fine-tune your bet and wager anywhere from 0.01 credits to a maximum of 150 credits per spin.

Black Gold comes with active paylines, which means that you can turn some of the lines off to pay less while playing. You can check out which payline goes where but also all of the symbols in the slot by simply pressing the "view pays" button. The paying symbols are eight in number and all of their payouts are given as multipliers to your coin value, which can increase with a bigger bet per line. So if you play with the smallest stake, you'll get payouts of 2-400 coins per sequence, but if you play with the max bet per line, you'll get prizes of 10-2,000 coins instead. Moreover, what's really great is that any prize collected while playing for real cash could also lead to some bonus payouts, thanks to the slot's unusual respin feature.

If you don't like being tied to a computer to enjoy the game, you also have an option to play Black Gold on your Android phone and tablet or your iOS device. Touch the spin button on your screen to immediately start playing or firstly access the menu in your top-left corner to adjust your stake before you begin.

Once you start digging for oil, you'll get paid each time three-five identical symbols appear in a sequence on any of the active paylines, from left to right. Once you collect a winning sequence, the slot will automatically start the free respin feature which will see only the centre reel spin for the second time to get you an additional win at no cost. And with each consecutive respin, the multiplier meter on your screen will also increase, allowing you to collect a bonus prize that's multiplied by up to 5x by connecting five wins one after another.

For more bonus payouts, you will need to collect some of the special symbols in the game. The oil drills, for instance, can unlock a click-me bonus feature if three of the symbols appear on your screen. This feature will give you a chance to win a random cash prize by choosing one out of three drills. A similar bonus game is activated by three oil pump symbols on reels one, two, and five. Only in this feature, you'll be guessing whether the next number on the oil pump will be higher or lower in order to determine what kind of cash prize you collect.

As a final bonus, this slot gives you a free spins game which you can trigger with at least three barn symbols on your screen. Once activated, this bonus feature is played with the barn symbols acting as wild multipliers that can substitute for other symbols but also boost your payouts. Land the right barn symbol when playing for real money and you can earn up to 10x more than what you would get during the base game.

Another slot from the creative team at BetSoft that offers medium-volatility gameplay, a captivating presentation, and plenty of bonuses, Black Gold was built to attract punters that don't like to risk much. If you like casual slot machines that are not too volatile but can still pay well, Black Gold may have what you need. Play for as little as a penny and you can still win solid prizes in real money mode but bet more and you can expect a jackpot of 300,000 coins. The hit rate is definitely high enough to ensure you get paid often during your sessions, although this also means that most of your payouts will not be very big.

For players who like volatile slots that can reward the extra risk with larger prizes, there are a few similar high-variance games that you may want to check out instead. Try out NetEnt's Dead or Alive for another western slot but one with only nine paylines and very volatile gameplay. Or, alternatively, you can go for BetSoft's own Blood Eternal slot machine which likewise offers 30 paylines but also much higher prizes of up to 965,620 coins. Find these slots and plenty of other games at some of our top-rated online casinos and you can claim a rewarding welcome bonus once you sign up.