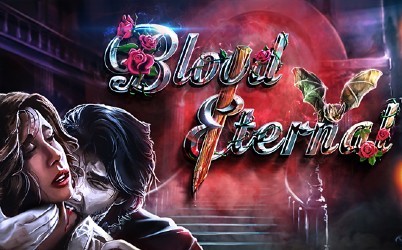 Another addition in BetSoft's ever-growing Classics collection, the Blood Eternal slot is a chilling horror-themed slot machine that offers high-variance gameplay, a 95% RTP, plenty of bonuses and huge cash prizes. Learn more about the features and prizes of this in our full review to get all the info you need.

Featuring an expanded 6-reels screen and 30 fixed paylines that are seasoned with a variety of features, Blood Eternal offers any punter who sits down to enjoy it plenty of profit-making opportunities. Play the slot for real cash on any device you want and you might just get to snag prizes of up to a whopping 965,620 coins per round.

A slot for fans of vampire movies and legends, Blood Eternal by Betsoft features a scary presentation and thematic bonuses that will make you "fall in love at first bite". Special double-symbol payouts, free spins, showers of wild icons, and a double-up function have all been added in this slot and matched with both-ways-to-win mechanics to create a stimulating and very profitable online casino game.

You don't need to have used slot machines before to enjoy Blood Eternal because the game is quite easy to play. Intuitive coin value and bet level controls on your left give you an easy way to set up your stake while all your spin controls, including the Auto Play function, can be found easily on your right. With only a few clicks of the buttons, you can switch from a small bet of 0.30 credits (0.01 per coin) to a max bet of 150 credits per round.

You can win prizes at real money online slots site by collecting symbols across 30 different paylines, each of which can be seen when you press its respective number on any side of the reels. The prizes are given by 11 symbols, all offering payouts in coins that increase proportionately with your bet level. With one coin per payline, you can win payouts ranging from 2 coins to up to 10,000 coins per sequence. On the other hand, if you bet five coins while playing for real cash, you'll be able to get payouts that go up to 50,000 coins per sequence. And the best part is that the slot pays prizes in both directions, giving you an unusual chance to earn double the payouts and increase your hit ratio significantly.

Blood Eternal can also be played on all mobile devices that support HTML5, including Android phones and tablets as well as iOS-based devices. When you switch to playing on a smartphone, the slot gives you only one control on your screen for spinning the reels while all other controls will remain hidden inside the menu in your top-left corner.

The only way to win a payout in this slot is to form a sequence of three or more matching symbols on a payline, from left to right or the other way around. Apart from the wild symbol, which can substitute for other icons and pay up to 3,750 coins per sequence, another profitable symbol you'll definitely like to see frequently is the bat symbol. This symbol can appear on the reels either as a single or as a double symbol to form 12-of-a-kind sequences and pay special bonus prizes of up to 50,000 coins per payline.

Other valuable icons you can collect are the vampire and human symbols which trigger the main bonus game. The vampires only appear on reels two and five while the humans can only be collected on reels three and four. When a vampire symbol appears next to a human symbol, the vampire will feed on the human to produce a bonus of 8 free spins which can be retriggered in the same way. The free spins are played with the humans and vampires locked in their place to act as wild symbols that can substitute for other icons, including the bat symbols. The humans and vampires can also produce "wild blood spatters" – bonus features that will turn 1-4 neighbouring symbols into wilds during every free spin.

And as a last bonus, the slot also gives you a classic double-up game, the same you can find in most of BetSoft's slot machines. Press the "Double Up" button after you win a payout to take a 50/50 gamble on your winnings by guessing the outcome of the next coin toss. Naturally, if you guess wrong, you'll lose your money.

Blood Eternal by BetSoft is mostly aimed at the modern punter who likes engaging and risky, high-volatility online slots. Apart from the stunning theme and presentation, what immediately stands out about this game is its unusual mix of great bonuses, both-ways payouts, and 6-reels that when added together, make the game quite lucrative. There's up to 965,620 coins to be won on the reels when playing for real money, which given the lower hit rate of the slot don't seem that impossible.

Yet, if you're not a punter who likes to take a higher risk to go after really big payouts, you can also try out some of BetSoft's less volatile slot machines. For some of the software studio's unique 3D slots, you can try the Angler, which offers mid-variance gameplay, 20 paylines, and thematic bonuses like a free spins game and a double-up feature. Another popular slot you may want to explore is the Fa Fa Twins – BetSoft's 243-ways game with a reel duplicating feature and the same double-up function. Make sure to visit some of our top online casinos to enjoy these slots and more for real cash, but also claim some juicy welcome bonuses after you register for an account.