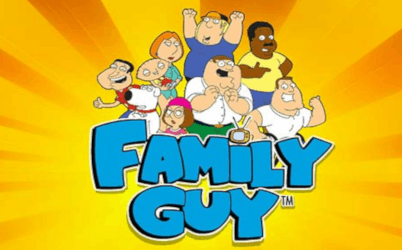 Family Guy has made it to the world of online slot games thanks to IGT. Five reels and 30 paylines of cartoon mayhem can be enjoyed online on desktop and all mobile devices. This medium-volatility game comes with a 94.3% RTP and could make you happier than Peter after a night at the Drunken Clam. Check out our full review of this action-packed game below.

Love ‘em or hate ‘em, the adventures of the Griffin family have been entertaining audiences since 1999 and remain hugely popular to this day. It’s no surprise to find that it’s also the subject of one of the biggest slot games in the entire IGT range, or that the developer pulled out all the stops to make sure that it’s as action-packed and off-the-wall as the TV show.

When you join the Griffin gang, plus characters such as Quagmire, Cleveland and Joe, you can trigger some awesome bonuses. Battle the Giant Chicken for prizes, help Stewie to destroy the world, or become Peter and find romance with Lois before Quagmire gets to her. Or you could just drink beer with the gang and claim prizes if your chosen character is still standing once everyone else has passed out. You get the idea.

The reels are set against the familiar backdrop of the Griffin family’s living room. IGT have used their standard control buttons which are easy to understand, even if you have never played a slot machine in your life. Although it’s a 30-line game, you play with 50 coins and just need to adjust the coin value to suit your budget. If you’re a casual punter, then just 0.50 is needed at the low limit, but serious players are able to stake up to 1,500.00 on each spin. Maximum jackpots of 500x the total stake can be won at all bet levels.

You win standard spins by matching up three or more of the same symbol across any of the 30 paylines. A paytable reveals how many coins you win for each combination, as well as how the multiple bonus rounds work.

Although IGT often restrict their licensed games to land based casinos, we’re very pleased to report that the Family Guy slot machine has been optimised to play on desktop computers Android and iOS devices, with no loss of functionality or features.

Based in Nevada, USA, IGT, or International Game Technology, are one of the best-known developers of casino games, with decades of experience. Like all of their slots, the Family Guy slot machine is fully licensed for playing around much of the world and it comes with a high return to players percentage.

All of the symbols are related to Family Guy, so there are none of the high-card icons that fill so many slots games. Smaller wins come from a bottle of Pawtucket Patriot Ale, a TV, Stewie’s teddy bear Rupert, and his ray gun.

Higher prizes are yours when matching symbols of the six family members cross any of the 30 paylines. Peter is worth 25, 75 and 250 coins when he’s seen on 3, 4, or all 5 reels. But the Family Guy slot game really comes to life with all the bonus features that IGT have packed into it. The extra treat that’s likely to be seen the most often is the Family Guy logo acting as other symbols to complete winning combinations for you. This wild symbol is also worth 500 coins when it crosses a whole payline without substituting for anything else.

There are several randomly-awarded in-game features, such as cash prizes, extra wild symbols and higher payouts from character symbols.
A World Bonus symbol triggers any of three special rounds, all themed around the show.
The Drunken Clam bonus awards between 265 and 1,000 coins when you select one of the characters sitting around the bar. Everyone drinks beer and you win higher multiplier prizes if your character is the last still standing.
In the Chicken Fight feature, you take the side of Peter or the Evil Chicken and once the fighting ends, select from sacks to win up to 1,000 coins.
If you trigger the Lois’ Hot Free Spins, 10 bonus games play out. You collect heart symbols during the round, turning Lois into extra wilds that can make the free games more lucrative as they progress.

As you would expect, all of these features are animated in the same style as the TV show, making the Family Guy slot machine perfect for fans of the show. If you don’t like Family Guy, we’ve found a cartoon alternative that might be right up your street.

The gameplay of the Family Guy slot is outstanding. Having multiple in-game features and several side games is a rare thing in any slot machine. Having all this in a game based on one of the top TV shows is guaranteed to bring a huge number of fans to these fun and exciting reels.

Not a fan? Then take a look at the Wacky Races slot from Bally Technologies. Join Dick Dastardly, Muttley, Penelope Pitstop and the rest of the characters in a 5-reel 40-line game. It’s another slot that comes packed with extra treats, such as random wild reels, free games with extra wilds and a pick-a-prize round. There’s even a progressive jackpot to claim in this mobile-optimised game.

Check out either slot at some of our best online casinos and see what rewards these cartoon creations can bring to you.