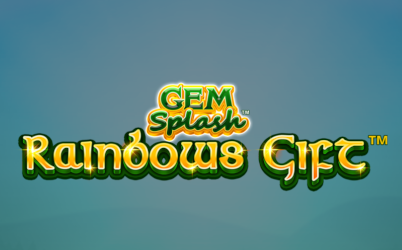 The Gem Splash: Rainbows Gift online and mobile slot from Playtech is an Irish-themed game with 5 reels and 30 paylines. It has a special free spins feature where the number of rows and paylines increases, to make it easier to win prizes. Gem Splash and Gem Drop symbols pay prizes of up to 100x your stake when they combine on the reels. On top of this feature, any of 3 progressive jackpots can be won at random. The Gem Splash: Rainbows Gift slot is filled with classic symbols such as harps, pipes, and a cheery leprechaun. This medium to high volatility game has an average payback percentage of 96.46%. It offers an exceptionally wide bet range and you’ll find it at our top rated casinos.

Available to play across PCs, iOS, Windows, and Android mobiles, Gem Splash: Rainbows Gift has a cartoon style that will appeal to the many players who like slots based around Irish luck. Other symbols include a lucky horseshoe and the traditional playing card emblems.

A Celtic-style frame surround the reels, which is another classic feature used across many Irish-themed games. The Playtech developer has clearly decided not to take risks with the design of the Gem Splash: Rainbows Gift slots game.

How to Play the Gem Splash: Rainbows Gift Online Slot

This game has a bet level to match almost any budget, with the option to wager between 0.10 and 500.00 per spin. The controls are nice and easy to use and you simply click Plus and Minus buttons to adjust stakes.

The medium to high volatility of the Gem Splash: Rainbows Gift slot can see slightly less frequent winning spins, but higher average prizes than in lower variance games. Average returns are 96.46% and not counting the progressive jackpots, you can win up to 480x your stake.

It’s not just fans of Irish-themed slots who will enjoy the Gem Splash: Rainbows Gift slot. The main bonus features will appeal to anyone looking for something a little different, The Gem Drop and Gem Splash symbols can lead to big payouts, although the 480x maximum win is relatively low.

If you like the gameplay, but want a slot with a different theme, play the Gem Splash: Marilyn Monroe slot machine, which is part of the same series.

You’ll find both games at the best online and mobile casino sites carrying the Playtech range, such as those featured here at gambling.com.