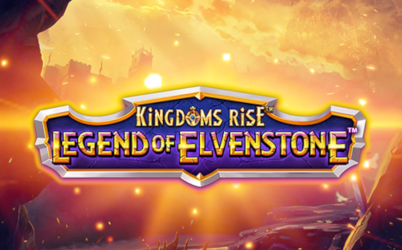 Kingdoms Rise: Legend of Elvenstone is the newest chapter in the Kingdoms Rise series of online slot games from Playtech. This online slot has quickly caught on with players and offers an enticing gameplay and be an easy game to understand for players of all levels.

Players at the top online slot sites will join in a hunt through a Middle Earth and jump through rings of excitement and defend walls of potential peril whilst fighting the ferocious dragon. Game tokens add to the RTP, which are collected as you play.

The heroes in the Kingdoms Rise Legend of Elvenstone online slot battle the dragon in a fantasy-themed game whilst fighting across 10 paylines and a bounty of bonus features. You want to first select your wager, and they can range from £0.10 to £500 for real-money players.

The Kingdoms Rise: Legend of Elvenstone slot machine Wild Drop symbol resembles a magnifying mirror. When it appears, it will cause a symbol position to be wild for all the other symbols on the next spin except for the dragon.

Kingdoms Rise Jackpots, a Dragon respin feature and a falling wilds in-reel feature are amongst the highlights promised by Playtech for the company’s next Kingdoms Rise online slot sequel. If the gameplay action is anything like Kingdoms Rise: Guardians of the Abyss, the free spins will be plentiful. The dropping wilds in the Legend of Elvenstone will have three character power-ups.

The RTP for the Kingdoms Rise: Legend of Elvenstone online slot is a medium-variance game in line with a maximum RTP of 96.84%. The maximum bet is £500 and the minimum bet is £0.10 for real money play.

This game is loaded with both innovative play options, a healthy return, the potential for some massive jackpots and high-tech graphics and brilliant imagery. The latest online slot from Playtech is likely to appeal to fans of the other six games in this series.

If you want to go outside the Playtech family to chase dragons, give the Dragons Story online slot from Nextgen a spin and watch as symbols transform on this 25-payline slot. The Dungeons and Dragons: Crystal Caverns online slot offers 20 paylines built around the classic computer game.

See all of our Playtech online casinos to check out other online slot offerings and try out Kingdoms Rise: Legend of Elvenstone right here.