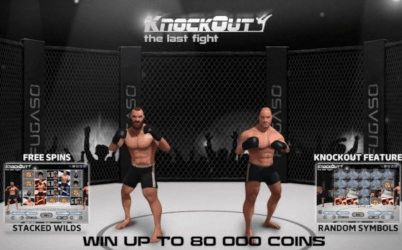 Online slot games clash with MMA in Knockout by Fugaso, and it's unlike anything you've played before. Apart from a stunning presentation, this 40-paylines slot game also comes with a couple of extras that can hand you some enticing bonus prizes. Play it and you’ll get a chance to enjoy random symbol swaps, free spins bonuses, and stacks of wilds that could lead you to some big payouts thanks to the game's medium volatility and payout percentage of 96.52%. For more on these features, make sure to read our full review.

Letting you literally kick some prizes out of the screen, the new Knockout: the Last Fight slot from Fugaso will give you a chance to enter the fight of your life for some big cash prizes. This action-packed slot game inspired by MMA fights will keep you fully immersed for hours, thanks to its guitar-driven soundtrack, random bonus features, and payouts of up to 80,000 coins when playing for real money. Available on all mobile devices and computers alike, Knockout: the Last Fight can make your adrenaline jump no matter where you are.

Before you begin playing the Knockout: the Last Fight slot game, you will first need to choose the size of your coins and then select how many coins per payline you want to bet (up to 10). This can be easily done with the bet controls on your right and left, which can take you from a small bet of 0.20 credits per round to a max bet of 200 credits. After you choose a bet size, just use the spin button to begin playing.

The pay table lists nine symbols that can trigger payouts, all of which are picture icons that offer prizes listed in coins. To see how the slot paylines are drawn, just press any number that’s sitting on the left or right side of the reels. The lowest prize you can get when playing with the minimum bet is 5 coins for three matching symbols while the highest is 200 coins for five fighter symbols. However, when you play for real money using 10 coins, those prizes can go up to 2,000 coins for a five-of-a-kind win. One interesting feature here worth mentioning is that your highest-paying symbols can also form stacks that show the fighters in full form, which in turn can also activate some of the bonuses explained in the section below.

Playing on a mobile phone is likewise easy because the slot gives you large touch-sensitive buttons to control your spins. The game can be enjoyed on any device that supports HTML5, Android and iOS-based devices included. To start playing on a phone or tablet, just turn your device sideways and touch the screen once the slot finishes loading.

As the fight kicks off on your screen, you will be waiting for at least three of the same picture symbols to fall on an existing payline, starting at the first reel on your left. The ones you’ll be most glad to see are the MMA fighters as they can form symbol stacks on the screen and pay the best prizes. But even when they don’t end up on your reels, you can still bank some nice payouts with the help of the wild symbols. These W-shaped icons can appear on the second, third, and fourth reel to substitute for all other symbols and trigger the highest-paying combos possible.

Should the “Hero” and “Opponent” symbols show up stacked on reel two and four, respectively, they will jump right into the ring to launch the free spins bonus games. The slot gives you 10 free spins each time such an event happens but also 2 additional spins when a stacked wild symbol lands on the middle reel during the feature. During the free spins bonus, the “Hero” will also activate a special Knockout feature on every spin that will have the fighter kick the reels to turn broken clusters of symbols in the same matching symbol, including the wild. This feature is also available during the base game where it can be randomly activated on any spin.

And yet another feature you can trigger randomly is the progressive jackpot. This same jackpot is available in a variety of other slots from Fugaso and it is split into three tiers of prizes: Maxi, Midi, and Mini. You can win it during any round, regardless of the size of your bet.

In a nutshell, Knockout: the Last Fight by Fugaso is an entertaining mid-variance slot game that can speak to many different punters. No matter if you like to bet big or small this slot will still be able to provide you with stimulating gameplay, good prizes, and profitable bonus features. There are payouts of up to 80,000 coins to be won in the slot when playing for real money, plus three progressive jackpots and a few extra features that were thrown into the mix to give you more value. If you like slot machines that have a balanced hit ratio which won’t expose you to big risks, you can check this game out.

Alternatively, if you’d rather play more volatile slots that pay less often but can trigger big prizes when they do, you can also try some of Fugaso’s other slot games, like the Godfather-inspired Cosa Nostra. This online slot offers you the same jackpots, five-of-a-kind payouts of up to 4,000 coins, plus a free spins bonus game. Carousel by Fugaso is another interesting alternative, and it likewise offers jackpot prizes, free spins bonus games, but also 720 ways to win.