Legacy of the Wild Online Slot

Play Legacy of the Wild For Free!
Bookmark It For Later 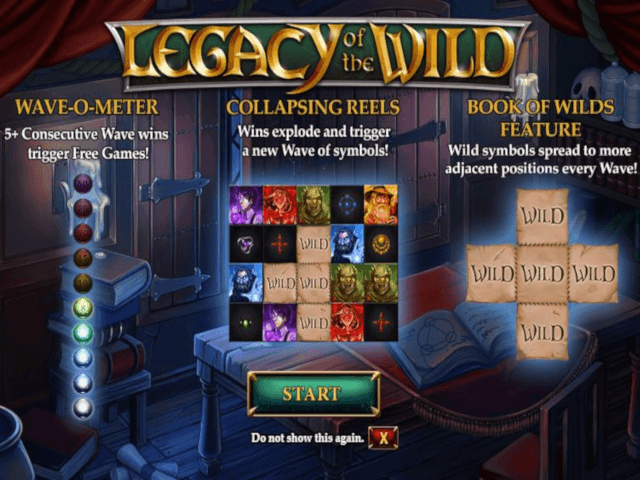 When looking for slots with the most interesting, unique, never-used-before themes, your first choice should always be a slot by Playtech. The developer really takes its time and uses its imagination to create the most visually appealing slots with the most amazing themes. Legacy of the Wild by Playtech is one of those slots that has a mystical theme, intertwined with sorcerers, magic, devils and demons. Accompanied by equally authentic special features, Legacy of the Wild will take you to some enchanting payouts of more than 750x the coin value. With its RTP of 96.06% and the medium to high variance, the slot can appeal to any slots player.

But mobile players will be happy to hear that the slot is perfectly compatible with all devices, so they can take their gaming on the go. Regardless of the device you’re using, Legacy of the Wild will provide you with several exciting features, the free spins and the wilds being the most important ones.

Legacy of the Wild Slot Controls and Setup

In addition to playing it on your desktop device, the slot gives you the option to either play it on your phone or tablet that uses the Android operating system, or your iPad or iPhone if you’re an iOS user. Regardless of which one you choose, you will get the same bet configuration options to click or tap on in order to place your bets. As you will see, the coin value can go from mere 0.01 to 3 credits, which for the 40 paylines present in the slot, would make your total bet anywhere from 0.40 to 120 credits.

Legacy of the Wild Gameplay and Bonus Features

One thing that you should know is that Legacy of the Wild slot has anything but boring gameplay. In fact, the game flow is seamless, with plenty of cool features and modifiers.

For starters, you get the collapsing reels feature. This means that for any winning combo you land, you will trigger a wave. The wave will make all winning combos explode after you’ve been paid out, causing a new wave of symbols to drop onto the reels from above. Consequently, each new wave can create new winning combos for another wave and improved wins. You will be triggering new waves for as long as new winning combos are created.

With no doubt, Legacy of the Wild slot machine has what it takes for a slot to be considered as an above average one, both in terms of the theme and the gameplay. It will appeal to all fantasy, mystical, and fiction-themed slot fans since it has all sorts of magic and mystical-related things included in it.

Moreover, it would be a good match for both low and high-rollers, even though the latter might find the 750x the coin value payline win a bit challenging. But, there are so many free spins that can be won and wilds to cover for symbols you lack to create a winning combo. So grabbing a significantly bigger payout than that wouldn’t be unexpected.

But, if you’re in for a more rewarding slot at your online casino, you should consider Playtech’s Coin! Coin! Coin! slot, which gives you more than 700,000 credits for the max bet!