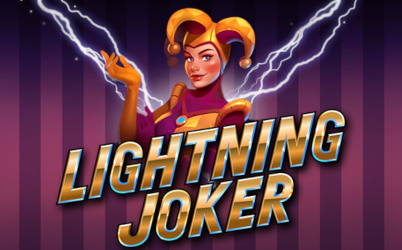 Lightning Joker is a forthcoming new slot game from popular developers Yggdrasil Gaming, pencilled in for release on June 10, 2020. As you might guess, the theme of the game will be centred around lightning strikes that boost your winnings!

Little information has been divulged by Yggdrasil Gaming, but on the basis of what their other ‘Joker’ theme releases, we have a few inklings on what to expect.

Other slot games by Yggdrasil, such as Joker Millions and The Dark Joker Rizes, have many exciting features, but vary in terms of paylines. However, most Yggdrasil games offer 5 reels and we expect no different when Lightning Joker hits the shelves.

We can say with a great deal of certainty that Lightning Joker will be compatible with the latest Android and iOS devices, both mobile and tablet, while desktop users will also be able to play. At least that has been the case with the most recent Yggdrasil releases.

Players are also likely to be given the opportunity to experiment with a demo of Lightening Joker when it becomes available before deciding whether or not they’re willing to play with real money.

However, it’s anyone’s guess what the paylines will be – Yggdrasil games tend to be anything between 10 and 25, but we’ll find out closer to the release date on June 10.

As yet, few details have been dropped by Yggdrasil, but many of their games are quite dark in comparison to other top casino software providers and Lightning Joker could well add to that list.

The good thing is, Yggdrasil – who are well known for providing excellent graphics – typically offer multipliers in their newest online slots games, so we’re keeping our fingers crossed that Lightning Joker will fit that bill too.

However, scatters and wilds are less frequent on their releases, so we might have to make do without them on Lightning Joker, although an autoplay option is to be expected.

Unfortunately, we don’t yet have all the information we would like on the upcoming release of Lightning Joker, but we can take an educated guess on what to expect in terms of Maximum Win, RTP and Volatility.

The maximum bet on a lot of Yggdrasil games tends to be in the modest region of 20-25, which of course will limit your maximum win capacity. That may not appeal to more hardcore slot players, but for the casual punter it should suffice. As for RTP, some Yggdrasil games are as low as 94% and as high as 96% – somewhere in the middle and we’d be happy. As usual you can expect plenty of free spins levels and bonuses.

Although a June release has been slated, it’s not uncommon for release dates to be pushed back if products are not yet the finished article, but we’re confident the award-winning provider Yggdrasil will deliver on time and up to scratch.

In the meantime, you might want to try the demo or real money version of Joker Millions Online Slot by Yggdrasil, which may give you a greater indication as to what to expect from Lightning Joker. Alternatively, you can also check out other slots to play at our recommended online casino sites.

When will Lightning Joker Online Slot be released?

The release date for Lightning Joker Online Slot by Yggdrasil is set for June 10, 2020.