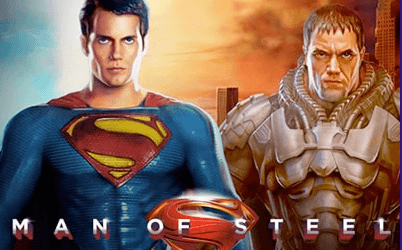 Another hit from the successful DC Comics superhero series. Step into Superman’s boots in the Man of Steel online slot game and battle his arch nemesis General Zod!

Step into Superman’s boots in the Man of Steel slot game and battle his arch nemesis General Zod. This five-reel, 25 – or 50 – payline online slot from Playtech is part of the DC Comics superhero series, and there are two game modes and some slick presentation to enjoy.

If you're a superhero fan, then you'll probably already have seen some of Playtech's other DC-inspired slots, such as Batman and Flash. Playtech is a well-established software developer, making a variety of casino, bingo and sports betting titles, as well as online slots.

The goal in the Man of Steel online slot machine is to defeat General Zod and his warriors and defend planet earth. There are five reels and 25 paylines in the standard game, although you can increase this to 50 – more on how to do that later. Graphically, the game does justice to the film characters. You'll recognise Henry Cavill, who plays Superman in the 2013 movie, as well as Michael Shannon as General Zod. The bold and detailed background is great, but doesn’t distract from the slots themselves.

You'll also notice a number of supporting characters, including Lois Lane and Superman's dad. The main aim of this online slot is to get the free spins going in the Battle for Earth or Krypton modes. Read on to learn how to activate these modes for the best pay-outs.

The supporting cast in the movie make up the standard symbols in this slot. The red Superman avatar has the highest standard value – matching five of these gives you a 1,000-coin win. This is followed by Lois Lane, worth 250 coins for a match of five. The lesser symbols are represented by things like aeroplanes, Clark Kent's glasses, and the Daily Bugle. They fit the theme well, but in general you'll want to try to avoid these if you're aiming for a big win.

Superman and General Zod are the wilds, and worth 1,000 coins if you can match five in a row. Depending on who you land, they’ll move one place per spin to the right (for Superman) or left (for Zod). If you can land them both on the same row together, you'll activate the Battle for Earth mode. This gives you unlimited free spins and adds Zod's teammates as additional wilds. If they meet Superman on the same reel, they'll create more wilds, and the potential for an even bigger win.

The Krypton bonus is activated if you land the krypton symbol on reel five, and can increase the paylines to 50. There's also the progressive jackpot to keep in mind when playing this slot – the higher the bet, the higher the chance of hitting it.