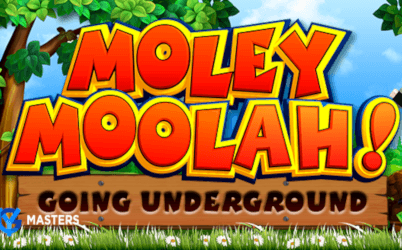 Join a cartoon mole on the hunt for treasures when you play the Moley Moolah slot from Yggdrasil Gaming. It’s a bright, cheerful game with 5-reels, 10-lines, and an average RTP of 95.74% that you can play on PCs and mobiles for a wide range of stakes. The game is available to play at top online slots sites right now!

The artists at Yggdrasil Gaming must have had fun designing the colourful symbols of garden gnomes, sunflowers, and the cartoon mole. The reels sit buried in the ground, where animated worms crawl past tree roots and bones.

Other symbols include playing card icons, pickaxes, a miners’ hat, and the game logo. It’s optimised for iOS, Android, and Windows-powered mobiles, as well as PCs, and laptops, and with the cartoonish soundtrack, you can be sure that it looks and sounds good on any device.

It also plays well, with sticks of dynamite able to act as others, and filling reels in an explosive in-game feature. Collect acorns during a free games round to claim instant rewards, and trigger extra sets of reels. It here that you can dig up wins of up to 6,750x the total bet.

How to Play the Moley Moolah Slot Machine

To match the bright symbols, even the control buttons are vividly coloured. Select your stake from a range of 0.10 to 100.00 per spin, then click the green spin button and see where the symbols come to a rest. Although the Moley Moolah slot is a 10-line game, you can win from runs of matching symbols from either the left or right sides.

The blue Autoplay button sets the reels spinning on their own for up to 1000x, and the red ‘I’ tab opens up the paytable, which lists how much you win from each symbol. The most valuable symbol is the game logo, and when it’s seen on 3, 4, or all 5 reels across a line, you win 3x, 10x, or 50x your stake.

There are 2 wild symbols in this game. The box of dynamite acts as others if it’s in the right place to complete combinations. Occasionally, the mole will appear above the reels and give them a shake, adding extra dynamite boxes to the mix, and the longer he shakes them, the more wilds you’ll see.

The mole is also another wild symbol, who not only stands in for others, but also triggers a special free spins bonus round when he stops in any 3 or more places on the middle reels. You earn 15 bonus games, plus 2, 3, or 4 acorns that start to fill a meter above the reels.

You collect more acorns during the round, and once you have 5 in total, a second set of reels appears. This doubles the chances of landing a win, and also increases the speed at which you collect even more acorns.

Collect another 5 to activate a third set of reels, and 5 more to see the maximum of four reel sets spinning at once for any remaining free games. You can’t retrigger this round, but along with the huge winning potential from 4 sets of reels, the acorn meter also pays out prizes as it fills up.

The full reel set filling with the most valuable symbol, along with a full meter above the game, can combine to give you a win equal to 6,750x your bet, or up to 675,000.00. Moley Moolah is a medium volatility game where the average return to players percentage is 95.74%.

For bright, cartoonish games with ingenious features, look no further. Moley Moolah stands out on all platforms, with some fun animated sequences, and the cheerful style will brighten up even the dullest days.

The highlight is the free spins bonus round, and once you unlock extra sets of reels, the odds of winning will double, triple, and then quadruple on each spin. You won’t always see all 4 sets during the bonus games, but it’s quite easy to activate at least 1 more.

Dig into the Moley Moolah slots at the top online casinos and unearth some no deposit bonus packages when you join our recommended sites.