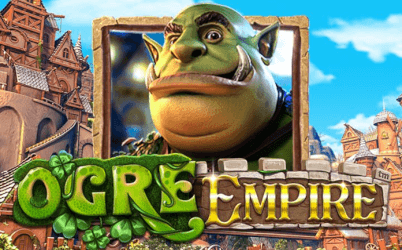 If you think Ogres are something you should stay away from, think again. This special-feature-packed slot game from Betsoft has a more than respectable 95.2% RTP which can be played on desktop or any mobile device. Learn more details about how you can get paid in this medium-variance slot game in our full Ogre Empire review!

In the Ogre Empire slot game, these bulky green brutes may not be as charming as Shrek but they'll certainly make you feel at ease once they start appearing on your screen to trigger prizes. Collect them on up to 25 fixed paylines and combine them with other characters and you can get a share of a jackpot of 25,000x your line bet while playing for real money at a recommended online slots site, but also enjoy a number of stimulating bonus features.

Like all new BetSoft slots, Ogre Empire can be played on all devices to give punters a chance to make some money even on the move. But where this game differs from most slots from the studio is that it features two modes of playing, each offering a different benefit to the player. Switch between modes to enjoy low or high payouts, trigger cascading reels, and activate some win multipliers or expanding wilds to get more out of any round you play.

If you haven't played slot machines before, don't worry. Ogre Empire is quite easy to play. Before you get started, you'll only need to use the line bet control on your left to pick a payline bet you want to play with. You can use this control to choose anywhere from a small stake of 0.25 credits to a max bet of only 25 credits.

What's interesting about this slot game is that it features a variety of symbols but you won't be able to see all of them unless you play in both of the game's modes. All of the symbols in Ogre Empire have prizes that are listed in credits which can be seen inside the paytable along with the paylines that can trigger them. When played through a real money casino, this slot can pay prizes starting at 5x the line bet and going up to 400x and that's only right after you start the game. But thanks to the unusual dual-mode gameplay, you will also get to enjoy payouts of up to 1,000x the line bet per sequence once the Night-Time mode kicks in.

For mobile players, BetSoft has an optimized version of the slot that can be played directly on practically all iOS and Android devices. You can enjoy Ogre Empire on your phone in both landscape and portrait mode and even on older smartphone models. Use the touch-sensitive spin buttons to play through your session manually or tweak the Auto Play settings for some hands-free slot entertainment.

If you want to win some cash on the Ogre Empire slot outside of the bonus rounds, you'll need to collect at least three matching symbols on a payline, from left to right. When you start playing, you will be playing in the Day-Time mode where you can collect up to ten different symbols which offer a variety of prizes. The Day-Time mode is also played with a special expanding wild and a symbol smash feature which has the ogre destroy stone symbols on the screen to let new ones fall in their places, hopefully triggering new wins.

The Day-Time mode ends when the special 3x1 moon symbol lands in full view on the reels to activate the Night-Time mode. When night comes, the background will change and the ogre will fall asleep to allow for new bonus symbols to appear on the screen. These new symbols are the king, the queen, and the joker, which hide during daytime behind other symbols while the ogre is awake. But once night falls, you'll see the joker pop out from behind the Ace symbols to serve as a 2x wild multiplier, while the King and Queen will emerge from their respective signs to pay the highest prizes of up to 1,000x the payline bet.

No matter which mode you're playing in, you'll always have a chance to earn more than what the symbols pay thanks to the slot's double-up feature. This feature can be engaged after any payout is won to bet your winnings on a game of coin toss. If you guess where the coin will land, you will be able to double half or all of your winnings. But make a wrong guess and you'll lose the money.

Ogre Empire by BetSoft is another attractive dual-mode slot machine from the studio's workshop that can be enjoyed by many types of players. Not only can this slot fit any budget but it is also a medium-variance game that can speak to both players who like to play safe and those in search for bigger payouts. With two modes, a variety of extras, and prizes of 25,000x the line bet hiding on the reels, there's more than enough ways to make a profit while playing Ogre Empire for real cash. However, don't be surprised if large prizes don't come your way easily because Ogre Empire still retains a fairly high hit rate.

For players who want a riskier slot game that can reward their patience with bigger payouts, we suggest BetSoft's Good Girl Bad Girl slot. This unique slot machine offers triple-mode playing that lets you switch between low, medium, and high volatility gameplay. Microgaming's Showdown Saloon is likewise a good choice if you want a high-variance slot with free spins bonuses, respins, and other profitable extras. You can also pay a visit to some of our top online casinos to find a whole range of other slots that can suit your taste.