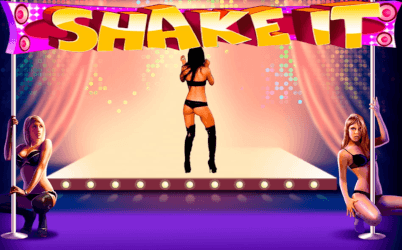 Available for mobile, desktop, and tablet, Shake It by Fugaso is a medium variance online slot which can be played on any device. And like a number of slots from the studio, this machine also packs expanding wilds and free re-spins that can help you bank something extra on any around you play. Read through our easy Shake It online slot guide to get all the details you need.

Shake It is a new online slot machine from the creative workshop of Fugaso and it is one of the cheekiest games built by the studio so far. Due to its loud club music, go-go dancers, and animated symbols of twerking buttocks, Shake It can sometimes be a tad distracting to play. But focus on its paytable for a minute and you’ll see what makes this slot machine an interesting choice. With the help of its both-ways-to-win mechanics and 10 active paylines, this slot can give you payouts of up to 50,000 coins when playing with real cash, plus three different jackpots that only grow bigger with each new round.

Shake It Slot Controls and Setup

Playing Shake it by Fugaso is quite easy, thanks to the simplicity of the slot and its user-friendly screen controls. The game gives you full control over your stake, allowing you to select/deselect paylines, choose your coin size, but also choose the number of coins per payline. Thanks to this, you can play with any wager you have in mind, from a minimum stake of 0.01 credits to a max bet of 100 credits per spin.

The payouts can be collected by seven different symbols which give away prizes of 5-250 coins when playing with one coin per payline. But if you play for real money with 10 coins per line, you’ll have even better prizes of 50-2,500 coins to look forward to. These payouts can be won on 10 active paylines which can be individually switched on or off, depending on your preference. To see how a payline is determined, you only need to press one of the numbers that sit next to the reels. And what’s even better about this slot is that it gives you an unusual chance of collecting prizes in both directions, giving you a higher hit rate than many other 10-paylines slot games that pay only left to right.

When you switch to a smartphone or a tablet, the playing experience is practically the same only you’ll have fewer controls to clutter your screen. This slot can be enjoyed on any Android or iOS device and to start playing, you only need to rotate your phone and tap the screen. Use the spin button to play through your rounds manually or set up the Auto mode for an automated session.

Shake It Gameplay and Bonus Features

Once the club music starts playing and the cheeky symbols begin rolling on your screen, you will be waiting for a matching sequence of at least three identical symbols to fall on a payline, from left to right, and vice versa. The most valuable symbol in the game and one you’ll want to see on your screen more often is the tattooed dancer, which can pay 50-2,500 coins when playing for real cash, depending on your bet. Another prized icon you won’t mind seeing all the time is the wild symbol, which can trigger the game’s re-spin function.

The wild symbol can appear only on reels two, three, and four. When it lands on any reel, it automatically expands over the entire reel it occupies, giving you three wild symbols that can substitute and complete your sequences. And not only does the wild icon expand, but it also triggers a re-spin during which all wilds stay sticky on the screen, waiting for other symbols to appear on adjacent reels to trigger a win.

And lastly, the game also has three different progressive jackpots which are also part of a number of other exciting slots from Fugaso. The jackpots are given in Mini, Midi, and Maxi size, each higher than the one preceding it, and they increase the more you bet on the game. To trigger any prize, you don’t need to wager the max bet on every round but just play with any stake you want and hope that the slot triggers a jackpot randomly.

Thanks to its simplicity, Shake It can be a match for many different players. If you are a fan of old-school slot games, this game is an interesting option to explore that gives you an amusing theme, the traditional simple features, but also both ways to win. When played through a real money casino, this medium-variance slot can certainly pay well, offering prizes of up to 50,000 coins. However, given the high hit ratio of the game, it seems that big payouts are an exception here rather than a frequent event.

In a nutshell, if you want a slot game that can entertain you for long without burning through your budget, the Shake It online slot is worth adding to your list. On the other hand, if you’re more interested in slots with more risk and a potential for bigger payouts, you can also try some of Fugaso’s high-volatility slot machines. The Crazy Bot is one popular choice that’s known for its volatility, interesting theme, but also a whole selection of bonus features, and so is the Mummy 2018, which is another great slot from the studio that can pay huge prizes, up to 100,000 coins. Try out both games for real money at some of the top casinos on our website and you can also get to claim some lucrative bonuses after registration.