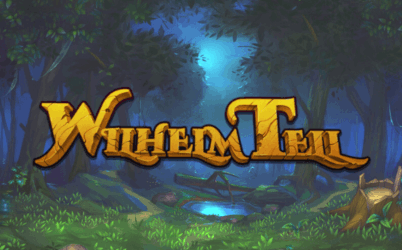 Take a trip to the mountains and get ready for an adventure with folk hero marksman Wilhelm Tell. With plenty of nods to the classic tale, the Wilhelm Tell slot, a Yggdrasil game available at top slots sites, captivates players with its charming muted colour scheme, beautifully animated characters and breath-taking alpine setting. So, grab your apples and crossbows and read our full Wilhelm Tell slot review below!

If you’re a frequent online slot player the controls of Wilhelm Tell won’t prove difficult to understand. The classic Yggdrasil gaming setup is here - with lines, coin value, cash bet, max bet, the spin button, autoplay button, win display and balance all featured at the bottom of the screen.

The stacked Wild symbol (Tell’s son hoping his head won’t be shot off) covers 3 reels in the Wilhelm Tell slot and can show up on all reels of the game. Nudges are a possibility in this slot. This is when the stacked wild lands only partially visible and the game pushes it into play, giving you extra chances to win.

Yggdrasil’s Wilhelm Tell is beyond good looking - it is absolutely stunning, and it’s got some great gameplay to match. While some may not be sold on the base game’s low amount of paylines, others will find the prospect of that single free spin with a 50x multiplier massively enticing. If you want to play games akin to Wilhelm Tell but with more paylines we’d recommend trying out similar Yggdrasil gaming offerings like the Vikings Go Berzerk slot.