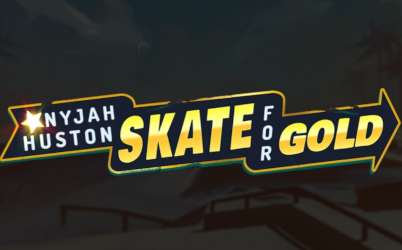 The Nyjah Huston Skate for Gold online pokie from Play’n GO is unlike pretty much any other game, at least visually. As far as gameplay, this 5-reel game has medium volatility and a 96.2% RTP with a max jackpot of 500,000 credits. Read our Gambling.com review below for information about free spins, compatibility and features in this Play’n GO online pokie and find out about our online casino bonuses as well.

Play Nyjah Huston Skate For Gold For Free!
Bookmark It For Later 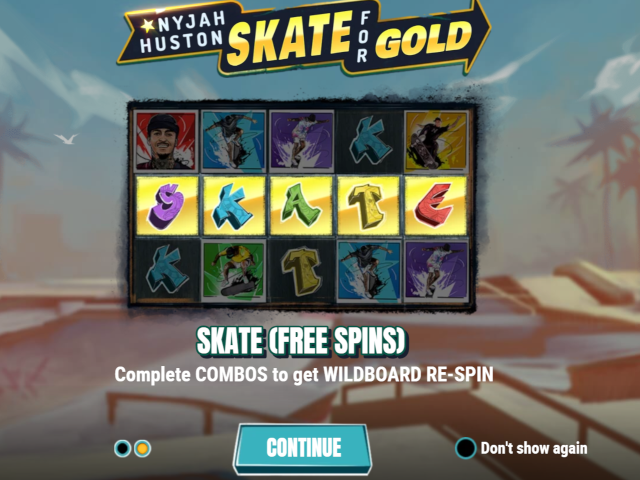 Play Free Demo
Version Directly in Your Browser
Play Nyjah Huston Skate For Gold For Free!
Bookmark It For Later

This 5-reel, 3-row Play’n GO online pokie features 10 paylines and a theme dedicated to Nyjah Huston, a 12-time gold medalist at the Summer X Games and four-time Street Division champion at the World Skateboarding Championships. Huston will hit some of his tricks right across the reels in 3D fashion if you get lucky and the top real money prize is 5,000 times your stake.

Everything in the Nyjah Huston Skate for Gold game feels fresh. The skateboarding theme will have obvious appeal for fans of the sport and the rocking soundtrack is different from what you’ll hear in most games, though it does become repetitive pretty quickly.

This game also has some features and symbols that you won’t see in any other games, or at least not in the guises that you’ll see here.

How to Play Nyjah Huston Skate for Gold Online Pokie

To access the paytable, click on the “i” button in the lower left. Smaller buttons in that part of the screen let you control the volume, settings, and turbo spins (toggle those on or off by hitting the lightning bolt button). The game’s 10 paylines pay out left-to-right starting with the first reel.

The highest-paying regular symbol is a facial depiction of Huston himself. That pays out 25 times the real money stake for five symbols on one spin. You get 5x the stake for four of that symbol and 2.5x for three. Four other depictions of Huston landing tricks are the next highest-paying symbols. After that there are five letter symbols – but here again this game presents a unique twist. Instead of standard symbols like playing cards or fruits that veterans of the top online pokie sites might be used to, the five lower-paying symbols in this game are letters that spell out S K A T E and are designed to look like street art.

The Wild, a stylish W, can expand into a skateboard and cover a whole reel. It might also turn into a golden Wildboard with a multiplier than can go as high as 10x.

On any base spin, if you land a combo meter it will trigger a trick by Huston. If that trick lands on any reel it leads to the Wildboard Respin. If you enter the free spins round, the combo meter is active on every spin. You get 12 bonus spins in this mode and this happens at a healthy frequency.

The Nyjah Huston Skate for Gold online pokie also hands out free spins in another unusual way. If you get the letters S K A T E in order on the reels, those five symbols turn gold and you get the free spins feature.

Players can hit the Autoplay button (the smaller orange button next to the green spin button) to choose as few as 10 and as many as 100 automatic spins.

The Nyjah Huston Skate for Gold online pokie is available in a mobile version for Android and iOS users. Players who like to play pokies on the go can play using their mobile phones or tablets as an alternative to the desktop version. Learn more about mobile pokies at Gambling.com and check out our list of best online casinos too.

This is a fast-paced game with an entertaining theme, lots of ways to win and a fair RTP. If we may nitpick, it’s a pretty steep drop between landing 5 matching symbols on a spin vs. landing 4. But otherwise this game should appeal to players of all levels. Even with an unusual theme, Nyjah Huston Skate for Gold is an easy game to understand for those just learning to play pokies. And high rollers will enjoy aiming for that max jackpot of 500,000 credits.

If you like both the payouts and the soundtrack for Nyjah Huston Skate for Gold, you’ll probably love some other Play’n GO pokies with a musical theme. In the rock genre, the company offers the Twisted Sister, Saxon and Annihilator online pokie games. Or for something with the opposite of a super-modern theme but similar payouts, try the Cat Wilde and the Doom of Dead online pokie from Play’n GO. That game features an Ancient Egyptian look but with the identical max payout (500,000 credits) and RTP (96.2%) as Nyjah Huston.