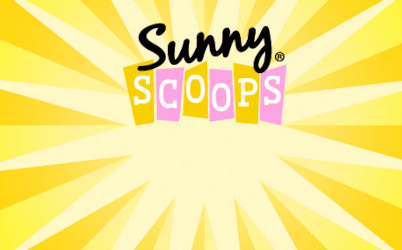 Featuring bright colours and ice cream scoops instead of traditional fruit symbols, Thunderkick's Sunny Scoops pokie game looks like it was built only for casual players. But start playing for real cash and you’ll discover a unique high-variance machine that not only gives you a fair RTP of 96% but also a chance to bank up to 50,000 credits with a single bet! Read our full guide to the Sunny Scoops pokie machine for more details on the extras and prizes available at the best online casinos.

A game that challenges the classic notion of 3-reels pokies, Sunny Scoops by Thunderkick is a 3x3 pokie machine with 14 fixed paylines and an unusual theme inspired by ice cream.

Like the Sunset Delight pokie that followed it, the Sunny Scoops pokie also features attractive bonuses apart from delicious symbols. Big multipliers for your prizes will help you boost any base game win while a free spins feature with respins and more multiplying symbols will ensure you get your hands on some big bonus payouts.

How To Play The Sunny Scoops Slot

Offering you the same minimalistic set of controls you get with every other Thunderkick game, the Sunny Scoops pokie was built for easy playing. Before you begin your session, use the chip button on your left side to choose your bet. You can select from over a dozen bet sizes, starting with a stake of 0.10 credits and ending at a max bet of 100 credits per round. After you set up your wager, just press the spin control to start earning some real money.

One of the interesting things about the game is not that it offers you up to 14 fixed paylines but that some of its win lines are vertical, giving you more chances to trigger a win. If you want to see the paylines at the top-ranked online pokie sites, just access the paytable from your bottom-left corner and the pokie will show you each line but also all of the symbols and their rewards. There are only seven symbols you can collect, each representing a different ice cream flavour and paying prizes in credits. The bottom three icons pay 0.50-0.80x your bet per sequence while the top symbols pay up to 5x your stake. However, these are only base prizes which can be boosted any time thanks to the pokie's special multiplier feature.

Since it’s an HTML5 casino game, Sunny Scoops is also available to players on Android and iOS mobile devices. Due to Thunderkick’s smart design, the experience you get when playing this pokie on a mobile phone is practically the same like when using a computer, with the only difference being that the screen controls are relocated for faster access.

Although it may look unusual to play, the Sunny Scoops pokie still pays prizes the usual way. To win a payout while playing for real money, you need to get three of the same ice cream symbols to fall on any available payline. The tastiest wins are given by the orange, green, and yellow ice cream scoops which pay prizes of 2x, 3x, and 5x your bet per sequence, respectively. But even if you get a smaller win, don’t worry, because there’s a chance that the multiplier feature will make that prize much better.

The multiplier bonus feature can be activated by collecting three matching symbols on a vertical payline, i.e. by getting a whole reel full of the same scoops. Such a combination will trigger the special bonus wheel which will appear on top of an ice cream cone to draw a prize. The wheel consists only of bonus game triggers and multiplier values that start at 2x and go up to a maximum of 7x, giving you a chance to win up to 35x your stake from a single sequence (5x max payout x 7).

And if the bonus wheel lands on a trigger instead, the pokie will award you a bonus of 10 free spins. Each ice cream flavour has a different bonus game which is played with only vanilla scoop symbols and the same symbols that triggered the feature. For each win you collect during the bonus, the pokie will give you one respin and advance the prize multiplier meter on your right by one position. Connect several wins consecutively and you can end up with multiple respins and prizes that are boosted by more than just 7x.

Play with a minimum stake and get a variety of smaller payouts or go for the max bet for a chance to bank up to 50,000 credits (500x your bet). Whatever your budget, you’ll surely feel better knowing that you get a fair RTP of 96.0% and a tempting hit rate of 36.6% whenever you play this game for real cash.

Sunny Scoops is a refreshing reincarnation of old-school pokie machines that combines classic design with some very modern bonus features. It’s a game that will appeal the most to top casino site players who want something more contemporary than a fruit machine but also punters in search of simple high-variance games.

Alternatively, if you’re not really interested in volatile pokies, you can also pay a visit to any of the Thunderkick casinos we’ve personally reviewed on our website to find more games from this unique studio. If you liked Sunny Scoops, the obvious choice to turn to would be the Sunset Delight pokie which gives you the same theme but also low-variance gameplay, 5 paylines, and a smaller jackpot of 413x your stake. We also suggest checking out Esqueleto Explosivo – a 17-payline pokie inspired by the Day of the dead which offers you cascading reels and really attractive win multipliers.