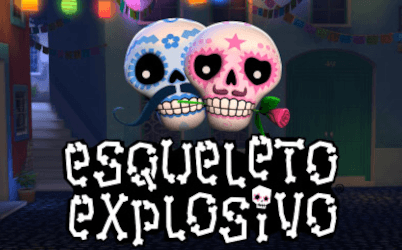 Celebrating the Mexican Day of the Dead with 5 reels, 17-paylines, and cascading reel mechanics, this funny-looking pokie machine will give you a unique, fun, and rewarding playing experience. Despite being a low-variance game, the Esqueleto Explosivo pokie by Thunderkick is still capable of paying well when you play for real money at a recommended online pokies site, giving you prizes of up to 70,000 credits per round. And all this is available at a quite fair RTP rate of 96%. 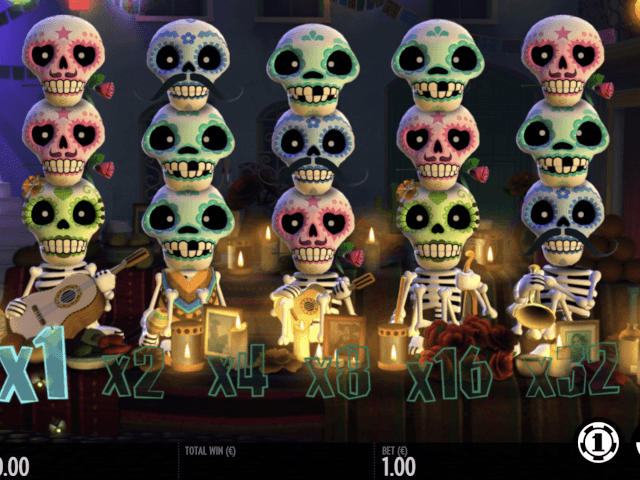 Enter the fantastic world of Esqueleto Explosivo, one of Thunderkick’s most popular pokie machines that launched this studio onto the global casino scene. One of many modern online pokie games with a Mexican theme (see Willy's Hot Chillies or Luchadaora, for example), Esqueleto Explosivo has plenty of unique features going for it.

Playable on tablets, computers, and smartphones at the top online mobile casinos, the Esqueleto Explosivo pokie machine can be enjoyed anywhere you go. And it’s a great thing it can because the pokie doesn’t only come with exploding skull symbols but it also features wild symbol bombs and payout multipliers that can really make this game worth your time and money.

Like any other game from Thunderkick, the Esqueleto Explosivo pokie is really easy to play, which makes it a good choice for all punters who are playing for the first time. The game’s dashboard features only three controls, two you can use to spin manually or in Auto Play mode and one control that determines the size of your bet. Press the chip control to select a stake between 0.10 credits and 100 credits per spin and then just use the spin button at the best online casinos to begin playing for real money prizes.

The pokie will give you 17 fixed paylines to collect symbols on which you can see by opening the paytable via the menu button in your bottom-left corner. The paytable is where you’ll also find the pokie's symbols, all of which are traditionally painted skulls (Calavera) that come in different colours. The lowest-paying symbols pay prizes of 0.20-1.2x your stake per sequence while the highest-paying icons can pay double that amount, up to 2.5x your stake. If these payouts look too small, that’s only because you haven’t taken the cascading reels into consideration. This special feature can quickly match any win with one or more bonus prizes, including payouts that are much bigger than what these symbols offer.

If you prefer using your smartphone to play pokie online, Esqueleto Explosivo will still have your back, offering you a chance to enjoy some unique pokie entertainment no matter where you are. The game was designed in HTML5 and as such it is available for both desktop players and punters who like to use their iOS and Android devices to play for real money.

To win some real cash in the Esqueleto Explosivo pokie, you’ll need to collect at least three matching symbols on any available payline. As the game pays in a left-to-right direction, any matching sequence will need to start at the first (leftmost) reel in order to trigger a prize. The most valuable symbols are the blue, green, and pink skulls, which can pay up to 1.2x, 1.4x, and 2.5x your bet, respectively.

Thanks to the cascading reels feature, any prize you win during a round will give you another chance to win a bigger and better payout at no extra cost. Once a winning sequence is collected, the pokie will pay the associated prize and then explode the winning symbols to allow for new ones to fall down from the top. Any explosion will also trigger the win multiplier feature which will multiply all subsequent prizes you win. If a new winning sequence is collected after the symbols explode, the feature will be triggered again and the pokie will increase the payout multiplier. This way, you can get up to five bonus payouts on any spin you play, the last one of which will be multiplied by a whopping 32x! Collect the right symbols, and you can win a prize of up to 700x your stake.

Another extra that will help you get better prizes as you play for real cash is the wild symbol. This symbol looks like a skull with sunglasses and it can substitute for all available symbols to help you trigger one or more winning sequences. The symbol will also explode up to eight neighbouring icons anytime it appears, allowing you to start the multiplier sequence and bank some really attractive payouts at one of our recommended online pokies sites.

Featuring that immersive Thunderkick gameplay, Esqueleto Explosivo is one of the most entertaining pokies in the studio’s online portfolio. It’s a great game to play if you’re looking for a unique low-variance pokie machine that’s both fair (96% RTP) and fun. With betting limits that go up to 100 credits per round and a jackpot of 700x your bet, this pokie will give you the opportunities you need to score some generous wins any time you play for real money. And thanks to its high hit ratio (32.3%), it will also make sure that you get rewarded frequently while waiting for those big prizes.

On the other hand, if you’re not really into low-variance games, you can also check out some of the software provider’s medium and high-variance options. For a similar pokie, we suggest you try the amazing Birds On A Wire, which gives you volatile gameplay but also free spins bonuses, cascading reels mechanics and prizes up to 9,000x your bet. And if you want a less volatile casino game, you can instead try out the medium-variance Jaguar Temple, which offers you a jackpot of 2,045x your stake. For even more pokies from this original software provider, you can pay a visit to any of our Thunderkick casinos where great games and alluring welcome bonuses await any new player.