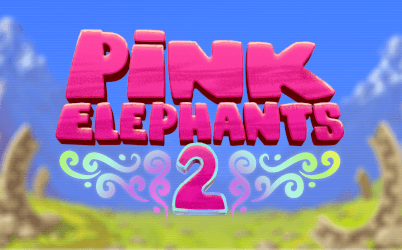 Coming to us from the Swedish software developers Thunderkick comes Pink Elephants 2, the sequel to the popular Pink Elephants which is already available to play at your favourite online casinos. With a release date expected for July 2020, slots fans have been on the edge of their seats in anticipation of the big release. If the first game is anything to go by, we’re in for a real treat with Pink Elephants 2.

While Pink Elephants 2 has yet to be released, we can make some educated guesses on some of the features set to be included based of Thunderkick’s previous exploits. With that said, given this is the sequel to the first release, we can paint a pretty good picture of what to expect come July.

Like its predecessor, Pink Elephants 2 will adopt a mythical, animal heavy theme which will be accompanied by a stunning blue and green backdrop featuring ancient stone monuments and huge elephant carved mountains in the background.

With a rumoured 4096 paylines, the Pink Elephant 2 online slot will also feature a fair 96.13% RTP and a mouth-watering max payout of 10000x your stake could have you heading off with a trunk full of cash from one of the top slot sites!

If the first edition of this fun slot is anything to go by, Pink Elephants 2 will be extremely easy to play and cater for both newer players and high rollers. Thunderkick also optimise all of their products across multiple platforms, so you can play on your laptop, tablet or mobile device (iOS and Android) - meaning Pink Elephants 2 will definitely be available at mobile casinos.

All you’ll need to do is open up your favourite slot site, head over to Pink Elephants 2, adjust the amount you want to wager and away you go. You will also be able to utilise their handy Autoplay function.

Pink Elephants is a 6-reel slot, with a minimum bet of £0.10 and a max of £100, and we expect its successor Pink Elephants 2 will likely follow this format.

Thunderkick enjoys rewarding their valued players, and so you will likely be able to avail of some Free Spins and bonuses in Pink Elephants 2.

Word on the street is that Scatter Symbols and Wilds will randomly appear across the reels which can, in turn, earn you some Free Spins or the lucrative Bonus game. Scatters and Wilds can also pop up in the Bonus game, which can always lead to more lucrative prizes.

Pink Elephants will play with high volatility, meaning a big win will be just around the corner. An RTP of 96.13% isn’t the best out there but offers fair value for money considering the eye-catching paydays on the cards and a juicy max payout of 10000x your stake.

While the public won’t get their hands on Pink Elephants 2 until it drops later this year, the team here at Gambling.com reckon Thunderkick are on to another winner here.

Fans of mythical and animal themes won’t want to miss this one, and anyone who enjoyed the first game should be licking their lips with anticipation! In the meantime, why not check out Pandamania from NYX Gaming to pass the time.

Be sure to check back here for the full review once the game is released.

When will Pink Elephants 2 be released?

Pink Elephants 2 is set to drop in July 2020 although no exact date has been revealed.