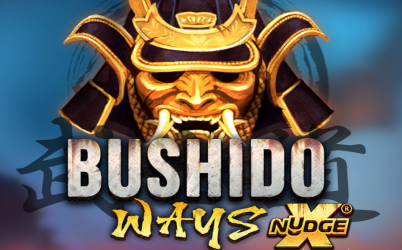 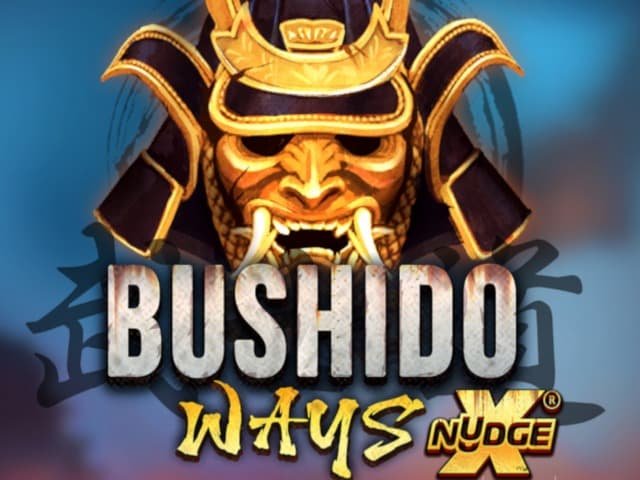 The Bushido Ways xNudge slot machine takes you back to feudal Japan, where Samurai warriors and Geishas were the celebrities of the times. This 5-reel slot has 4 rows of symbols and a 1,024 ways to win layout. You get more winning ways when the Samurai slice through wild symbols. Nudging wilds increase win multipliers, and symbols can transform to boost payouts. There are 2 free spins features to give your bankroll a further shot in the arm.

Stacked symbols of 3 Samurai and the Geisha add plenty of appeal to the looks of the Bushido Ways xNudge slot, ensuring that it’s a game which looks attractive on PCs, iOS, Android, and Windows mobiles at the top New Jersey online casinos or the best Pennsylvania online casinos. This is a highly volatile game where average returns are set at 96.1% and maximum wins can reach 3,000,000.00!

How to Play the Bushido Ways xNudge Slots Game

The reels sit in a wood-effect frame against the backdrop of a battlefield. Alongside the Oriental-style high card emblems, you’ll see 3 beautifully rendered Samurai warriors, and the Geisha, with each character stacked 4 rows high.

This game comes from Nolimit City and uses the standard set of user-friendly controls found across their range. Click the ‘$’ symbol and you reveal all of the wagering options, which run from 0.20 to 100.00. The arrow tab triggers an automatic spins function and the lightning bolt speeds things up, so you don’t have to wait to see the results.

You should review the paytable before playing, and it’s accessed via the 3 little dots on the controls. You can see how much each symbol pays when landing on at least 3 connected reels from the left side, and the Red Samurai pays the most, at 0.25x, 0.50x, and 2x when he lands on 3, 4, or all 5 reels. The Bushido Ways xNudge slot machine just as easy to use on PCs as it is on mobiles.

The Geisha is a 4-row high wild symbol. She only lands on the middle reel and can act as others to complete wins. If the Geisha lands only partly in view, a special xNudge feature see her move up or down, one row at a time until she’s fully in view. A multiplier rises by 1x with each row nudged, so you could get a big win from this elegant lady.

Standard wilds can land anywhere on reels 2 through to 5. The Samurai leap into action and slice any wilds on reels 3, 4, or 5 into 2, 3, or 4 symbols, respectively. This increases the number of ways to win, to a maximum of 12,288.

In the Oni Transformation feature, stacked Samurai landing at the same time as a mask bonus symbol will transform any lower-paying characters into the Red Samurai.

Three bonus symbols at once will award the Shogun Spins round, with 8 spins, plus 1 more for each additional bonus symbol in the triggering spin. During this round, at least 1 wild will appear on the reels each time.

If 3 or more bonus symbols land at the same time as the wild Geisha, you claim 8 Geisha Spins. Any multipliers built up from the xNudge feature remain active for the rest of this round, and the Geisha then sticks in place. Extra Geisha Spins are awarded equal to the multiplier amount, and single wilds are guaranteed on reels 2, 4, or 5 in each spin.

The total wins from either the Samurai or Geisha spins can reach a massive 30,000x your wager, or 3,000,000.00 at the highest stakes. The Bushido Ways xNudge slot machine has and average return to players percentage of 96.1%, but look out for a high volatility, which can see the reels spin a few times between wins.

We think Nolimit City could have replaced some of the card symbols with more themed images, but this aside, the Bushido Ways xNudge slot is an excellent game, with thrilling features. Nudging wilds with multipliers, symbol upgrades, and slicing wilds increasing the number of winning ways can add plenty of excitement to the base spins.

Add in the 2 free games features, where enhanced reels can lead to vast payouts, and the Bushido Ways xNudge slots game is one that fans of ancient customs and multiple bonus shouldn’t miss. Play at the best Pennsylvania and the best New Jersey slots sites, where you can collect the biggest welcome bonuses.

What is the xNudge feature of the Bushido Ways xNudge slot?

The Geisha triggers the xNudge feature if she lands on the middle reel, but isn’t fully in view. She nudges up or down until she fills all 4 rows, and a win multiplier rises with each. If the wild Geisha then completes a combination, the win gets multiplied in value by however many nudges it took to fill the reel.

Is the Bushido Ways xNudge slot a high volatility game?

Yes, it is. Like other high volatility games, the Bushido Ways xNudge slot machine tends to pay out prizes less frequently than lower variance games. But to compensate for this, average prize values can be higher, balancing out the relative lack of winning spins.

Where can I win real money playing the Bushido Ways xNudge slots game?

Read our reviews of the best online casinos that carry the Nolimit City range. These sites let you play the Bushido Ways xNudge slot, along with the rest of the games from this popular developer. The top casinos also have some outstanding welcome bonuses to collect when you join up.

What is the Bushido Ways xNudge online slot themed around?

‘Bushido’ was the code by which Samurai lived their lives. The Bushido Ways xNudge slots game has a Feudal Japanese theme. Ancient Samurai warriors and a beautiful Geisha appear across the reels, along with Asian-inspired playing card symbols, and masks.

Is the Bushido Ways xNudge slot compatible with iPhones?

You can play the Bushido Ways xNudge slot on an iPhone, iPad, or any mobile using the Android, or Windows operating systems. Apart from repositioned controls, that make them easier for thumbs to reach, it’s the same game as the desktop version.

What is the maximum payout from the Bushido Ways xNudge slot?

It’s possible to win a massive 30,000x your total wager during the course of either free spins bonus round. Play with 100.00 on the triggering spin and that adds up to 3,000,000.00 in prizes, although the bonus games end if you are lucky enough to hit this target.

How many ways to win cross the reels of the Bushido Ways xNudge slots game?

The Bushido Ways xNudge slot machine has 1,024 different ways to line symbols up across the 5 reels and 4 rows. You’ll need 3, 4, or 5 examples of the same symbol on adjacent reels from the left to win. Although wild symbols help out by acting as others if needed.

How much can I wager on each spin of the Bushido Ways xNudge reels?

The wager range of the Bushido Ways xNudge slots game is 0.20 to 100.00 per spin. That’s a generous spread which should suit most players. It’s easy to select a wager, and there are several options between the minimum and maximum stakes.

The Bushido Ways xNudge online slot comes from Nolimit City. This developer is based in Swede and Malta and is behind some of the most popular slots, such as East Coast vs West Coast, and San Quentin xWays.

When was the Bushido Ways xNudge online slot released?