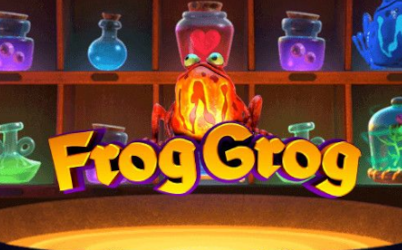 Add a touch of magic in your life with Thunderkick’s Frog Grog slot and get to experience the captivating gameplay that made this studio famous first hand. As a medium-variance slot with cascading reels mechanics and a fair RTP of 96.1%, Frog Grog always makes sure that you get plenty of chances to win some prizes while you play. Fill up the game’s 23 paylines with some of the high-value symbols while you play for real cash and you’ll get a chance to collect prizes that go up to 1,616x your bet!

Like the popular Esqueleto Explosivo, Frog Grog by Thunderkick features exploding symbols and win multipliers that can significantly boost your payouts but also extra mystery games that can produce prizes even where there aren’t any. And just like every slot game from the software provider, this game can be played on any device you want. Keep reading for more details on the features, payouts, and gameplay.

Frog Grog – How to play

Even if you haven’t tried any slot machine before, Frog Grog will not be hard to enjoy. On the bottom right, you have three intuitive buttons that will help you to control your session fully. Start with the chip button and select a bet between 0.10 and 100 credits per spin. Once you do, just use the manual spin control to start playing for real money at our recommended online casino sites on your own or the Auto Play button to kick back and have the slot play out up to 100 rounds automatically.

The prizes in Frog Grog can be won on up to 23 fixed paylines which can be viewed inside the paytable. You can access the paytable through the menu button on your left, and in it, you’ll also find all the bonus features, prizes, and symbols explained. The slot gives you seven different symbols, six of which can trigger payouts. Their prizes range from 0.20-3x your bet per sequence with the lowest symbols but they can also go up to 10x your bet with the highest-paying icons. And what’s really great is that all of these payouts are only base game prizes which can be multiplied by more than one time once the special cascading reels feature kicks in.

For players who prefer gaming on a tablet or a phone, Frog Grog offers the same playing experience as when using a computer. Thanks to Thunderkick’s smart design, the game features the same controls and layout no matter what device you use. You can play the slot in both manual and Auto Play mode when using a phone and you can play it on both Android and iOS devices at the mobile casinos.

Prizes in this magical laboratory are given any time three, four, or five of the same icons fall down on a payline, in a sequence that starts at the leftmost reel and stretches towards the rightmost one. For the best payouts, keep a close watch on the heart, flower, and moth symbols, as they can pay up to 3.5x, 6x, and 10x per sequence, respectively. But even when these icons don’t bring you a top win, the slot will still give you a chance to win good money with its cascading reels feature.

The cascading reels give you a chance to win some bonus prizes while you play for real cash by exploding winning symbols off your screen and replacing them with fresh new icons. And not only does the feature create new symbols but it also activates a payout multiplier for any following win. For each new prize you collect after your first payout during a round, the game will apply a win multiplier with a starting value of 2x. By triggering five consecutive wins, you can activate the highest multiplier which will boost any prizes by up to 7x.

The cascading reels feature can be even more rewarding when paired with some of the other bonuses of the Frog Grog slot. The frog wild symbol, for instance, can both substitute for other symbols but also explode all icons in a row to trigger a new multiplier and continue your cascading reels bonus when there are no new winning sequences. And should the winnings stop, the slot may also trigger the Mystery Game feature which will remove all but the moth, flower and frog symbols from your screen and pay out some randomly-selected prizes associated with those symbols.

Frog Grog by Thunderkick is another great example of how creative this amazing software studio can be. Apart from the game being exceptionally designed and compelling to play, it can also be quite generous with its rewards at our recommended online casino sites. As with any medium-variance slot, this game offers well-balanced payouts when you play for real cash which here can go up to a maximum of 1,616x your bet per round. The theoretical return rate (RTP) is at 96.1%, which is quite fair when it comes to online slot machines, and the hit rate is high enough (28.5%) as to give you plenty of wins that’ll keep you playing longer while waiting for bigger payouts.

If you prefer playing riskier slots that offer better prizes, Thunderkick also has a number of high-variance games that you can try. Fruit Warp is one of the most popular and unusual slots from the game studio that features no paylines, a unique warping feature, and payouts of up to 11,000x your stake! You can also try Birds On A Wire, which gives you the same cascading reels, multipliers of up to 20x and a 9,000x jackpot. Plenty of more slot machines from Thunderkick can be discovered through our online slots page where you can also find top games from other leading software makers.