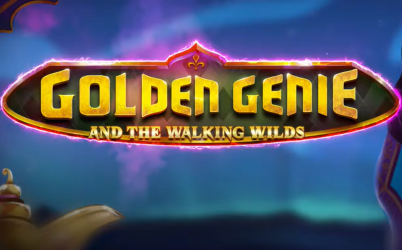 You don’t need to play with high stakes though, which is important if you’re a new player to online slot sites. The minimum bet is 0.20 per spin, and by clicking the ‘$’ symbol on the controls, all of the options are revealed. The most you can wager is 100.00 per spin, which makes this a game for all but high rollers.

Perhaps the most useful of all options is that you can play the Golden Genie and the Walking Wilds slot on PCs, iOS, Android, and Windows mobiles. Whatever device you prefer, it’s an easy game to set up, and even novice players will be spinning the reels in no time at both online and mobile casinos.

The Golden Genie features a win multiplier that rises by 1x in every spin and also increases the multiplier of the others. Multipliers increase, and the free games carry on, until all Genie symbols move out of view. Any new ones that appear adopt the same behaviour, so this exciting feature can continue for many spins.

While the artwork of the Golden Genie and the Walking Wilds slot is only average, it’s still a colourful game with some popular characters on the reels. It really stands out thanks to the bonus features, particularly the Genie Parade.

Make your wishes come true when you play the Golden Genie and the Walking Wilds slot at your favourite online and mobile casinos.