1421 Voyages of Zheng He Online Slot 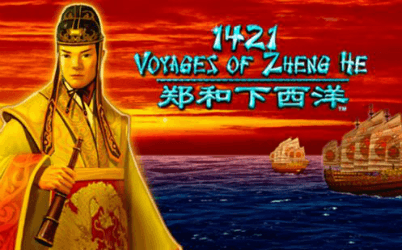 Game Provider: IGT
Play 1421 Voyages of Zheng He For Free!
Bookmark It For Later
Demo Not Available, Use The Offer Below To
Play for Real Money Now!
Showing , United States
EDIT LOCATION
locale:
Loading...

Until we discovered the 1421 Voyages of Zheng He slot machine, we had never heard of this explorer. A little research revealed that he was actually very famous in some parts of the world, having been a diplomat, admiral, treasure hunter and even court eunuch in the early Ming dynasty.

It’s a fascinating story, but outside the scope of this 1421 Voyages of Zheng He slot review, so we’ll let you do the background research if you want. Instead, let’s concentrate on why this has become such a hugely popular slot for the developer IGT.

Is it the historical background, attractive images on the reels, or the choice of 4 bonus games with different combinations of free spins and multipliers? It could also be the fact that you can play the 1421 Voyages of Zheng He slot at some of the top New Jersey casino sites and top Pennsylvania casino sites on desktop PCs, iOS and Android mobiles.

Add all of these elements together and you have a game that can’t fail to be successful. Playable for stakes of between 0.08 to 88.00 per spin, it’s ideal for casual gamblers and high rollers. With potential winnings of 888x your total wager, or 78,144.00 at the maximum bet, the 1421 Voyages of Zheng He slot from IGT is definitely a voyage worth taking.

Like all IGT slot machines, 1421 Voyages of Zheng He is easy to play. In Chinese culture, some numbers are highly significant, with the number 8 being seen as a bringer of good fortune. IGT has clearly latched on to this idea and you will find 88 paylines crossing the 5 reels.

The bet options are all multiples of the number 8 as well. Just click arrow buttons on the control panel until you reach a comfortable level, although you can adjust the stakes between spins if you want, perhaps to follow a particular strategy.

An Autoplay option lets you relax as the reels spin for up to 100 times, and you can speed up the gameplay by activating Turbo mode.

IGT has been developing slots since the 1960’s, and many of their games are restricted to land-based casinos. We’re pleased to say that the 1421 Voyages of Zheng He slot machine is fully optimized to play on Android and Apple mobiles, with all of the style and features carried across all platforms.

Take time to look through the paytable before playing for real cash. This is accessed by a button above the reels and has all the info needed on how the features work as well as how much you win by matching 3 or more symbols across paylines.

You win multiples of the line stake, with playing card symbols returning the smaller prizes. A traditional Chinese boat, ornamental table, ceremonial bell and Zheng He himself add a lot more visual impact to the game and pay out the higher prizes.

The Oriental style of the 1421 Voyages of Zheng He slot machine extends to an image of the sun setting over blue seas behind the reels. The symbols are surrounded by a bamboo-effect frame and a pleasing soundtrack adds to the overall atmosphere.

A lucky gold coin is a wild symbol that’s able to substitute for others, completing win-lines when it lands in the right places. The wild will be stacked several high on the reels, so it’s relatively easy to see it complete lines, and can really boost the frequency of prize-winning spins.

The highlight of the 1421 Voyages of Zheng He slot machine is the choice of bonus rounds. These are triggered when 3 or more symbols of an old map appear in any places at once.

If you see more map scatter symbols in any free spin, the round is retriggered and you get to choose which format plays out once the current games are done.

There is also the option to skip the free games entirely and go for a quick round that pays up to 91x your total stake if you find a golden ball under 1 of the 3 cups lined up on the deck of Zheng He’s ship.

The Verdict and a Similar Game

With a low to medium volatility and RTP that reach around 96%, the 1421 Voyages of Zheng He slot from IGT is a game that will suit players of all skill levels and experience. The graphics are a little old fashioned, but for many people, that simply adds to the charm.

We always prefer to see all symbols linked to the theme of a game, without the usual high card icons used, but that’s just an opinion and many disagree with us. If you like games that follow the hugely popular topic of Asian history, then 1421 Voyages of Zheng He could be just about perfect.

There is a seemingly endless demand for, and supply of, slots with a similar theme. If you are looking for a similar style and exciting features, try Microgaming’s Huangdi – The Yellow Emperor.

Both of these hit games can be found at some top slots sites in New Jersey and Pennsylvania. Be sure to start your voyage by collecting welcome bonus funds when you join up and open an account.