Deal or No Deal Online Slot 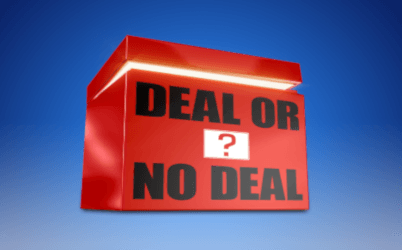 Game Provider: Endemol
Play Deal or No Deal For Free!
Bookmark It For Later 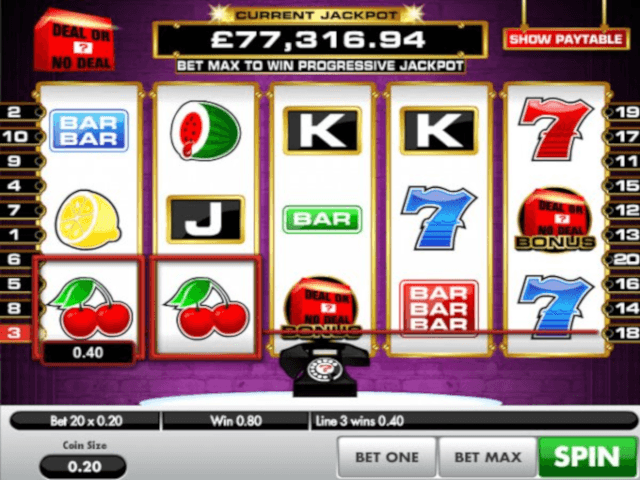 The Deal or No Deal slot game is based on the popular television show, Deal or No Deal. The show also spawned board games, arcade games and console games that tried to capture the feeling from the show. Due to the simplicity of the show itself, this proved to be an easy task.

The Deal or No Deal slot game by Gamesys does a fantastic job getting the look and the feel of the show in a self-contained piece of media. The slot machine is definitely for casual players. With a medium volatility rating, chances of winning are high, and the winnings are high as well due to the slots progressive jackpot.

This average difficulty machine has the option of paying out hundreds of thousands of dollars in one spin, and with 20 lines and 5 reels, there are plenty of opportunities for players to win big. Read our in-depth guide below then try it out at top slots sites in New Jersey and Pennsylvania.

Deal or No Deal Controls and Setup

Select a bet level on the middle-right and middle-left part of the screen by toggling the “-” and “+” buttons. The minimum coin bet per spin is 5p credits while the maximum bet is 20p credits. The Deal or No Deal slot machine has classic symbols such as cherries, watermelons, and 7s. There are two different bonus symbols; one is represented by the “DEAL OR NO DEAL” box, and 3 mystery cards.

The same applies to the mobile version, except the app is touch compatible. The player would touch where they would usually click on the desktop, and the slot will spin. Options are located on the bottom left, as well as information on what each combination means to the player. Just flip the phone into landscape mode and enjoy.

The Deal or No Deal slot machine has 20 paylines that can only be seen on the information screen. It’s possible to win hundreds of thousands in a single bet. The 20 paylines are a little on the low end, but players can still win frequently regardless.

Deal or No Deal Gameplay and Bonus Features

Deal or No Deal has a lot of bonuses within the slot game, such as the Banker’s Offer. The phone will start ringing as the reels are spinning. This means that the player has won some amount of money, though it won’t be revealed how much until the player either accepts or rejects the bankers offer.

Choose “Deal” or “No Deal.” “Deal” is choosing the Bankers offer, while “No Deal” rejects the offer and the player will win whatever match is on the reels.

Mystery Box Bonus Game is triggered when three or more Mystery Box Bonus symbols appear on any payline. The player will be presented with 15 boxes, three are empty, 11 have cash, and one earns the player a multiplier. Pick from the boxes until an empty box is found; this will end the bonus.

Deal or No Deal by Gamesys software is enjoyable, entertaining and really fun to play. The game is one of the more detailed online slots available; it actually feels like an authentic Deal or No Deal experience. The bonus game identical to the television show, and it adds an extra thrill to the slot game.

If you’re looking for more, try other great Gamesys software games like The Godfather, Secrets of the Phoenix, Houdini and Nuts and Bolts. Gamesys is Virgin Casinos own studio, and the company takes a lot of time and effort in crafting their games.