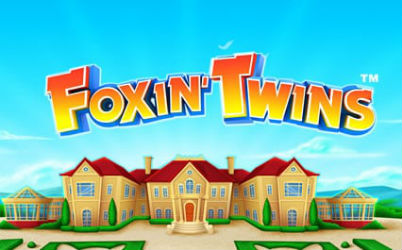 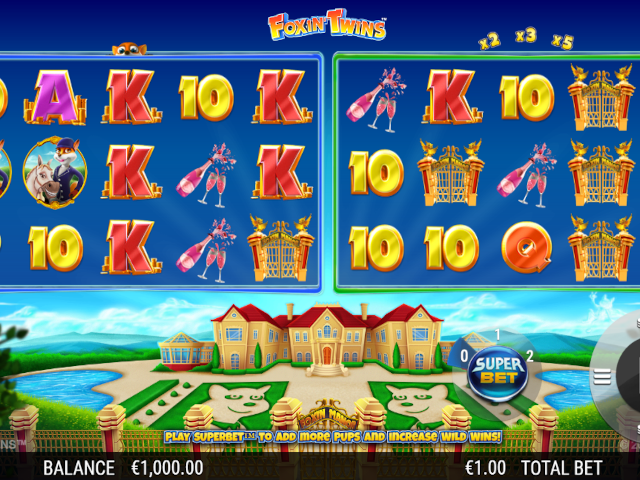 You must remember the couple of foxes and their lavish life from the two previous releases by NextGen, Foxin’ Wins and Foxin’ Wins again. Well, it looks like life is going pretty well for them, as they have expanded their empire and are now living in a huge palace. But now, we understand that the male fox has a twin, and they both have a share of the palace. Now, considering they each have an equal part of the property, it is only natural that they both have their own reel set in the Foxin’ Twins slot machine, right? Well, yes, NextGen has made sure to include 2 separate reel sets, with each of the fox twins appearing in their own separate set. Eager to find out more?

You should know that thanks to its HTML5 format, Foxin’ Twins is playable across all Android and iOS devices. You will have no issues at all with its performance and settings on any device you choose to play it, be it a laptop, a tablet or your smartphone.

You’ll get the same settings on any device, the chance to turn off or on the sounds and the chance to set the game in autoplay mode with just one click or tab. Now, as far as the bets go, you will notice that you’ll be placing bets for 25 paylines, even though you have two sets of reels. Therefore, the minimum total bet you could place is 0.25 and the maximum 6.25 credits. This means that the minimum bet per line will be 0.01 and the maximum 0.25. Sure, if you consider the SuperBet, these bets will go higher. The max bet for the SuperBet level 1 will be 12.50, and for the level 2, the max bet will be 25 credits.

As for symbols, in Foxin’ Twins online slot, you will find the two wilds presented with the twin foxes, one against the blue background and one against the green, which give you 500 coins for the best combo. The lady fox appears here, as well, giving you 250 coins, then the private jet giving you 100 and the gates and two glasses of champagne giving you 50 coins. The top playing card royals A and K give you 30, Q and J 25 coins and the 10 and 9 give you 15 coins. The scatter pays on both reel sets, giving you 100x the stake payout for a 10-of-a-kind winning combo.

You will notice that Foxin’ Twins online video slot is highly engaging. But the first decision you have to make that could change everything for you is to choose whether you’ll have the SuperBet activated or not and on which level. You will see that the first reel set is framed in blue and called reveal wild reel set and the second in green, called multiply wild reel set. On the blue reel set, the fox pup may appear and turn one or more symbols into wilds. Without the SuperBet active, you only have a fox pup on the third reel, but with it active on level one, it will appear on the three middle reels. With the SuperBet active on level two, you will see the fox pup on all reels. Now, unless the two random features are active, the fox pups will reveal the blue wilds, otherwise, they will reveal green wilds.

In the meantime, on the green reel set, for all wins you make with the help of one or more green wilds, your wins will be multiplied by 2x, 3x, 4x, 5x, 10x, or up to 20x, depending on the level of your SuperBet. The SuperBet costs at this point will be 25 coins on the level off, 50 coins on level 1 and 100 coins on level 2.

And last but not least, you have the gamble feature, where by choosing the right suit or color of the cards, you can further double or quadruple your winnings!

It is fair to say that Foxin’ Twins online slot has a lot to offer. Double the fun, double the payouts and double the engagement than its two other prequels had to offer. Considering you have a lot of bet options and a max win of 250,000 credits, we can safely say that it is a slot that could fit any slots players’ tastes.

You could try out Foxin’ Wins Again if you still haven’t and if you loved the little fox characters, as this is also a highly rewarding game, which can deliver payouts of up to 200,000 credits for a relatively small max bet.

But if you’re in for some major wins, you should consider playing another slot that is a sequel to a mega-hit by NextGen, called Medusa Megaways. It offers 117,649 ways to win and there are chances to win 50,000x the stake max win, for a max bet which is as small as 25 credits!

Check out Foxin' Twins or any of the other popular Foxin' titles at some of our favorite top New Jersey slots sites or top Pennsylvania slots sites.