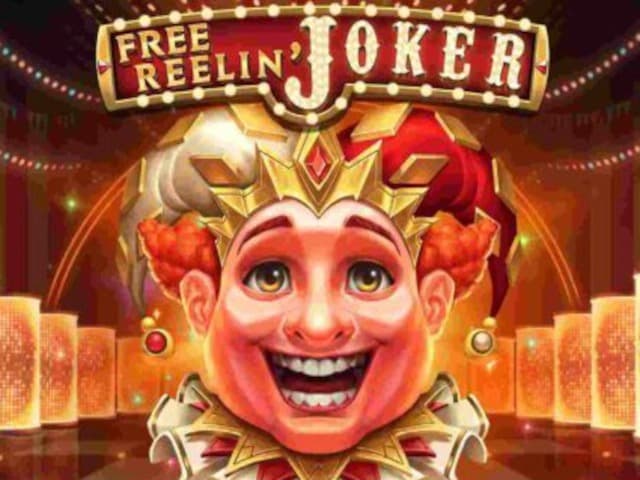 The Free Reelin’ Joker online slot stars a slightly mad-looking jester across a basic 3 reels. You can extend this to 6 reels with a sequence of wins from the wild Jokers, potentially claiming up to 1,000x your wager in the process.

Classic fruit symbols and red 7s join the Jokers on the colorful reels. It’s a desktop and mobile game from Play’n GO and you can spin the reels for a wide range of stakes at some of the best Pennsylvania and the best New Jersey slots sites. There’s a medium volatility and an excellent average payback percentage of 96.17%.

How to Play the Free Reelin’ Joker Slots Game

Designed to look like a physical machine in a Vegas casino, the Free Reelin’ Joker slot sparkles with lights, gold trim, and a lively soundtrack. Illuminated columns and a checkerboard floor add to the ambience, but it’s the symbols that we have come to see, and these are mostly classic fruit machine items.

Cherries, lemons, plums, and valuable red 7s appear on the gold-backed reels, with a high standard of graphics used throughout. There’s a slight 3D effect to each symbol, which helps this game to stand out nicely.

The Joker is a wild symbol in more ways than one. He looks mad, and has the power to act as other symbols if he can then complete a win. This swivel-eyed character comes in regular and golden versions.

The Free Reelin’ Joker slot machine uses the standard Play'n GO controls across desktop, Android, iOS, and Windows versions. You select a wager level from a scrolling bar beneath the reels and have plenty of options from a minimum of 0.10 to a maximum of 100.00 for each spin.

An orange button triggers Autoplay mode, and the ‘I’ tab opens up a paytable, where you see how the ingenious Free Reelin’ Fun feature works. It also lists how much each symbol pays when you land enough examples of the same type across the single payline that runs across the middle of the reels.

The two Jokers are key to the special features here. The regular Joker acts as others, but the golden Joker also doubles any win it helps to create. Only one golden Joker can appear in any spin. Any win with either Joker symbol locks the initial 3 reels, then expands the game, adding a fourth reel to the right side. If this improves the triggering win, a fifth reel appears, and this can happen one more time to give you a total of six reels.

Any win is then paid out and the Free Reelin’ Joker slot reverts back to a three-reel format until the next wild win.

A line of five regular Jokers, plus the golden version will pay the maximum possible win of 1,000x your wager. That equals 100,000.00 at the highest stake, which is a little less than some games, but still respectable.

Play’n GO rate the Free Reelin’ Joker slot at 4/10 for volatility. The average return to players percentage of 96.17% is quite generous for a medium variance game and it means that you can play for longer at our recommended Pennsylvania slots sites and the top New Jersey slots sites with less risk to your bankroll.

While there’s no stand-alone free spins feature in the Free Reelin’ Joker slot, the expanding reels mechanism keeps things exciting. It’s not always going to lead to a win improvement, but certainly improves the chances that you claim a decent prize.

The graphics are just what we like to see from classic fruit machines, and the crazy Jokers add some humor to proceedings. It’s an appealing game in both desktop and mobile formats. The medium volatility won’t suit players who prefer high variance, but we think it strikes just the right balance between the frequency of wins and average payouts.

Join the jolly Jokers and play one of the Best Slot Games at our recommended Play’n GO casinos today.

How much can I win playing the Free Reelin’ Joker slot?

The maximum win from the Free Reelin’ Joker slot machine is equal to 1,000x your total wager. That adds up to a prize of 100,000.00 if you play at the maximum stake. To win this, you need 5 regular Jokers and a golden Joker across the single payline.

What Is the Free Reelin’ Fun bonus feature?

Does the Free Reelin’ Joker slot have a free spins round?

You won’t find a free spins bonus feature here, but the Free Reelin’ Joker online slot is never dull, as the expanding reels feature triggers quite often. It’s common for three-reel, fruit-themed games such as this to do without free spins rounds.

How volatile is the Free Reelin’ Joker slots game?

This is a medium volatility game that the developer rates at 4/10 on their own scale. This level of variance means that when compared with other slots, the Free Reelin’ Joker slot machine pays average-sized prizes at an average frequency.

Is there a good return to players percentage from the Free Reelin’ Joker slot machine?

The return to players percentage of 96.17% is good for a medium volatility game. Thanks to the high average returns, you can play the Free Reelin’ Joker slot machine for longer, with less outlay. This is a long-term figure, so it can vary considerably during any session.

Can I play the Free Reelin’ Joker slot on my iPhone?

Yes, you can. The Free Reelin’ Joker slots game works on iPhones, iPads, Android, and Windows devices. Other than moving the controls around, it looks and plays in just the same way as the desktop game, so you won’t be sacrificing anything when you play on a phone or tablet.

Does the Free Reelin’ Joker slot have a good wager range?

The wager range runs from 0.10 to 100.00 per spin, with lots of options in between. It’s a generous range that will suit the vast majority of players. Selecting a wager level is easily done with a click on a scrolling bar beneath the reels of the Free Reelin’ Joker online slot.

Which developer is behind the Free Reelin’ Joker slots game?

The Free Reelin’ Joker slot machine comes from Play’n GO. This is one of the premier casino games developers and it joins a vast range that continues to expand. Other popular Play’n GO slots include Fire Joker Freeze, Prism of Gems, Rise of Merlin, and Reactoonz 2.

When was the Free Reelin’ Joker slots game released?

The Free Reelin’ Joker slot machine was released in desktop and mobile formats on 17th June 2021.