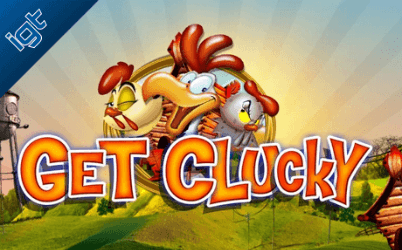 Game Provider: IGT
Play Get Clucky For Free!
Bookmark It For Later
Demo Not Available, Use The Offer Below To
Play for Real Money Now!

Get Clucky is a slot machine from IGT which gives you that chance to feather your nest with wins of up to 100,000.00. It’s a game themed around chickens and because it’s optimized for playing on Android and iOS mobile devices, you won’t have to be cooped up at home to enjoy it.

We’ll stop with the bad puns now, as IGT have thrown in a few of their own. The Get Clucky slot game comes with a bonus round named the Eggspanding Wilds Free Spins, while the Eggciting 2x Wild feature is another way that you will have a crack at landing prizes.

What these bonus features mean in plain English is that wild symbols will double the base value of any combination that they help to create and in the free spins round, wild symbols will also expand across any reels they land on. Huge multipliers can also be collected during the bonus games, and you won’t even have to shell out much to play, with stakes starting as low as 0.20 per spin.

Get Clucky Setup and Controls

All 20 paylines are always active and standard wins come from landing matching symbols across a line from the left side. All that you need to do is click arrow buttons below the reels to set your bet level. The Get Clucky slot game comes with a massive maximum stake of 2,000.00 per spin, so it’s a game for casual punters and the highest of high rollers.

Of course, there are lots of options in between the minimum and maximum stakes. Other control buttons give you the option to spin the reels automatically, and to set the volume levels. The fun soundtrack is a banjo-style tune with a variety of chicken noises playing when you get a win.

Click the Paytable button below the reels to see what each potential win is worth. Each payout is shown as multiplies of the per line stake. This table also outlines how the eggstra – sorry, extra – features work.

We were happy to see that unlike many slots from IGT, Get Clucky can be found at online and mobile casinos. The features work perfectly well across all platforms and the clear, sharp graphics look great even on the small screens of a mobile smartphone.

Are you ready to head on down to the farm? Read on then, as we eggsplian how the Get Clucky slot game works.

Get Clucky Gameplay and Special Features

This slot has a fun, cartoon style to it. The reels are set against the backdrop of a farm and surrounded with a wood-effect frame. One clever touch is that the Spin button is an egg, which shows how much care and attention to detail has been lavished on the Get Clucky slot machine.

While lower paying symbols include the 9, 10, J, Q, K and A icons, they are colorful and given a rustic style. You win higher prizes by landing lines of chickens, with five different birds featured. The two highest-paying chickens are worth 2x the line stake when either lands on just the first two reels from the left side, and 750x when filling whole paylines.

A happy-looking rooster is the wild symbol. He’s also the most valuable, paying between 10x and a massive 10,000x your line stake, depending on how many reels he lands on. If the wild symbol helps to create a winning combination, the standard prize is doubled in value, in the Eggspanding 2x Wild feature.

The Get Clucky game logo pays twice your stake when it’s seen in any 2 places, while 3 are worth 5x and any 4 will return a prize of 10x your total bet. 100x the total stake is won when it lands in any 5 places at once. Any 3 of or more of this scatter symbol will also start the Eggspanding Bonus Free Spins.

Ten extra games are awarded, during which the wild symbol expands across reels to make it easier to land winning combinations. This free spins round can be retriggered over and over, to a theoretical maximum of 180 games. But don’t count your chickens before they hatch, as you would need to retrigger the feature 18 times to reach this total, which is pretty unlikely.

The Verdict on Get Clucky and an Alternative Slot Machine

Get Clucky has a medium to high variance, so you may be spinning the reels a few times before collecting a win, but as an overall average, those wins can be higher than many other games. What’s more important is the return to players percentage, and that’s set at 95.7%, which is quite generous. The fun style, cool animations, great features and the fact that it’s optimized for desktop, Android and iOS devices have made the Get Clucky slot game a massive success.

If you want more cartoon critters, be sure to check out the Farm of Fun slot from Spinomenal. It’s filled with sheep, cows, pigs, geese and vegetables, plus a barn wild symbol and a scarecrow that triggers free games.

Some of the animals have escaped and if the farmer appears in any 3 places, you will need to help him find the hidden livestock, winning an award with each animal you uncover. Farm of Fun is a 5-reel, 50-line game with a lower volatility than Get Clucky.

You can spin the reels of both these farm-themed games at top Pennsylvania slot sites or top New Jersey slot sites, but there’s no need to get in a flap trying to find suitable sites, as we have plowed through the internet and found some of the best ones for you.