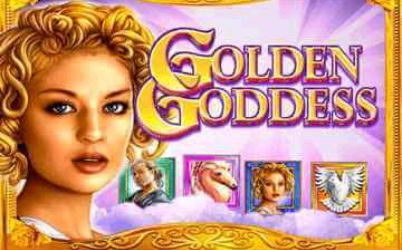 Few slots are as well-known as Golden Goddess from IGT. It’s one of those games that even non-players may recognize, and one look at these sumptuous reels could be all it needs to turn anyone into a fan.

The Golden Goddess slot machine sets the action in ancient Greece, where legendary heroes and mythical creatures are brought back to life across five reels and 40-paylines. The Goddess of the title is a beautiful woman who pays out some attractive prizes when she’s seen across a line. Wins of up to 25 times your stake can be claimed when the Golden Goddess logo appears, and the game comes with stacked symbols, a wild rose and a free spins round with extra winning potential.

The Golden Goddess slot machine has already been a smash-hit at physical casino sites and IGT clearly wanted to bring it to players who like to access their games from home. It can be played on desktop computers or across Android and iOS devices, with no loss of the style or features that have made it so popular and land-based sites.

IGT are a Nevada-based games developer with a fantastic reputation for delivering slots with style and immersive gameplay. The style of Golden Goddess is immediately apparent and really can’t be faulted, but what did we think of the way it plays out? Read our unbiased review and then take these classic reels for a spin at some recommended casino sites.

Getting Started With Golden Goddess

Even the control buttons of the Golden Goddess slot are decorated to give them a classic Greek style. All 40 paylines are active and you just need to decide how much to stake on each, winning multiples of the per line bet when matching symbols land across them from the left side.

Tired of clicking a button each time you want to spin the reels? Then go for the Auto option and sit back as they spin on their own for up to 50 times. The Golden Goddess slot game also has a handy option that varies the graphics quality, so if your internet or mobile connection isn’t great you won’t miss out on the gameplay or features.

As well as being able to pick what device to play on, you can also choose to listen to the soothing soundtrack or lower the volume to suit your own preferences. If you want to see what each combination of symbols will be worth, or how features such as stacked symbols and free games work, click the Paytable button below the reels of the Golden Goddess slot and all is revealed.

Gameplay and Features of Golden Goddess

The impressive landscape of ancient Greece, complete with temples and mountains, sits behind the reels, adding some dramatic images to your screen. The real excitement, however, starts when you land the colorful symbols across the game.

Along with the playing card icons 10, J, Q, K and A, you will see a white dove, pink (yes, pink), horse, a heroic character and the Goddess herself. She pays up to 50x the line bet, but it’s the game logo that’s worth by far the most. Land this right a cross a payline to claim that top award of 25x the total stake.

A Super Stacks feature sees symbols filling whole reels, making it much easier to complete combinations. Another special feature that can occur in any spin will come from the appearance of a delicate red rose, which can act as any other if it’s in the right place to bridge any gaps in a sequence of symbols.

If the rose fills all nine spots on the middle three reels, your reward will be a special free spins feature. Before these begin, the Gods give you the task of picking a rose to reveal a high-value symbol that will be Super Stacked on all reels during the seven free games. With a little luck, the valuable Goddess will be revealed, but whichever symbol is Super Stacked, you should be able to claim a few wins from it before the free spins end.

The Verdict and More Greek Goddesses

The Golden Goddess slot is a stunning-looking game that thanks to a low volatility, pays out quite often. The wins may be steady, but will tend to be fairly low in value, so let’s hope the Gods are looking down favourably on you in the bonus games and you collect some of the top prizes during the feature.

It would have been nice to see more than seven free spins awarded, and you can’t retrigger them like you can in many other slot machines, but that’s about the only minus point that we would give the Golden Goddess. Take these fantastic-looking reels for a spin at some of our favorite IGT online and mobile casinos, where rewarding welcome bonus packages are waiting to be claimed.

While you are there, be sure to play another of IGT’s Greek-themed slots. Treasures of Troy tells the famous story of love, war and wooden horses over five reels. The popular MultWays Xtra format can bring in some easy winnings and it has features such as a free spins game that can be re-triggered to a maximum of 130 spins.