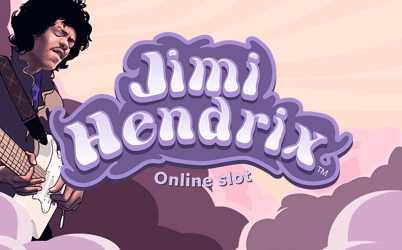 Known as the greatest guitarist to ever live, Jimi Hendrix's life was tragically cut short at the tender age of 27. Following his death in 1970, thousands of companies, services, and organizations approached the Hendrix family in pursuit of permission to use the Jimi Hendrix brand with few finding much success. Fortunately for all music and slot loving fans, NetEnt was able to reach a mutual agreement with the Hendrix family to use the heralded musician's name and likeness for their offering to top New Jersey casino sites and top Pennsylvania casino sites.

To ensure the graphics used throughout the game had the authentic Jimi Hendrix-look, NetEnt implemented a ten morph target system capable of exhibiting hundreds of facial expressions. This implementation allowed for NetEnt to offer top slots sites in New Jersey and Pennsylvania a fully 3D animated slot with a wealth of Jimi animations scattered through the gameplay.

Play real money slots at SugarHouse Casino and get a 100 percent deposit match up to $250.

The second of the two unique features is the 'Pick and Click' feature. This feature is actually a side game added to allow players to chose speakers to win free spins or a lucrative payout. When the spins are triggered, players receive the prizes in three varieties, with each differing by the types of wild symbols that appear. The potential winnings from this feature cutoff at 80,000 coins. Be on the lookout for free spins on this exciting game at US casinos sites like Hard Rock Casino.