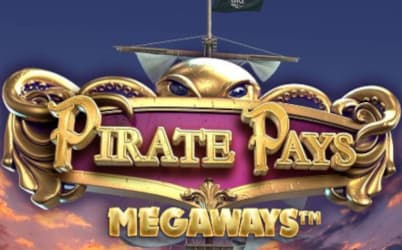 Get ready to plunder online casinos for booty worth up to 104,400x your wager with the Pirate Pays Megaways slot. The back of their ship is the setting for 6 reels with up to 7 symbols on each. You’ll see colorful jewels, parrots, and wheels, plus a valuable compass that adds extra wild symbols.

Unleash the fearsome Kraken and enjoy up to 25 free spins with multipliers. You get to accept or reject the bonus games in an exciting pre-spin feature.

Pirate Pays Megaways is a highly volatile slot where average returns come in at 96.23%. You can play on PCs and mobiles at some of the best sites that carry the Big Time Gaming range.

How to Play the Pirate Pays Megaways Slot

A lively sea shanty plays out as the six reels of the Pirate Pays Megaways slot spin. Treasure chests and playing card emblems are among the other symbols on the stern of the gently rolling ship, although unusually, there are no actual pirates here. But it’s a game that still looks bright and cheerful on PCs, Android, iOS, and Windows mobile platforms, so you won’t resent the lack of a motley crew.

There’s a wager range of 0.20 to 20.00 on each spin at our top New Jersey online casinos or the best Pennsylvania online casinos, which may seem low, but is actually quite normal for Megaways slot machines. Click the green arrow buttons below the stake indicator to find a wager to match your budget.

The arrows in a circle unlock an automatic spins option and the blue button with 3 small lines on it will open the paytable where you see how much each symbol is worth. You need to match between 3 and 6 examples of the same symbol on connected reels from the left. The Megaways system varies the number of symbols on each reel, from 2 to a maximum of 7, and with more symbols, it becomes easier to win. A purple jewel is the most valuable symbol, and you win 25x your wager if it lands across all 6 reels at once.

The parrot is a wild symbol which can stand in for others and help complete combinations. Each time you get a win, the symbols involved will vanish and those above will drop down to fill the gaps. Big Time Gaming call this a ‘Reactions’ feature, although Cascading, or Tumbling reels are the same thing. Reactions continue for as long as they create new winning combinations.

A reel below the middle 4 spins horizontally. It can hold regular symbols or a compass, which points either North, South, East, or West. Wild parrots then fill all symbol positions on that direction. Gold or purple treasure chests in any 3 or more places awaken the Kraken and trigger a fantastic 2-stage free games round.

A table holding a range of free spins from 6 to 20 appears to one side of the ship, with multipliers of 1x to 10x on the other. Cannons blast away up to 5 sections, before the Kraken offers a bonus round based on the remaining options. You can accept its offer, or reject it and have the cannons blow away more options. Be careful though, as you could reject an offer but end up with a less lucrative free spins feature. If the purple chest was part of the triggering symbols, you get an enhanced offer, with the 10 lowest options automatically removed from the cannon round.

Once any free spins begin, the starting multiplier applies to the first win, and increases by 1x for each Reaction throughout the bonus games. You earn 5 or 10 extra spins of 3 or 4 more treasure chests appear at once.

With enough Reactions over the course of the free spins, you can win 104,400x your wager, which equals a massive 2,088,00.00 at the maximum wager. You’ll find that the Pirate Pays Megaways slot has a high volatility, so set a wager level that can withstand a few losses in a row. The long-term payback percentage is a generous 96.23%.

We would still prefer a few pirate symbols in a slot called Pirate Pays Megaways, but it’s a colorful game, with jewels and parrots adding to the visual appeal. The Megaways system has become a hugely popular innovation from Big Time Gaming, and other features, such as extra wilds from the compass, and free games with increasing multipliers can help you to grab plenty of treasures. Claim those rewards from the recommended Pennsylvania slots sites and the top New Jersey slots sites featured here.

How much can I win from the Pirate Pays Megaways slot machine?

Wins from the Pirate Pays Megaways slot can reach a massive 104,00x your wager, which adds up to 2,088,000.00 at the highest stakes. That’s a generous multiplier, although only possible during the bonus games.

What is the Megaways feature of the Pirate Pays Megaways online slot?

The Megaways system places between 2 and 7 symbols on each reel of the Pirate Pays Megaways slot, with the number varying at random on each spin. With more symbols, you have more ways to win, to a maximum of 117,649.

What does the compass symbol do in the Pirate Pays Megaways slots game?

A compass on the bottom reel of the Pirate Pays Megaways online slot adds wild symbols to the game. The arrangement of those symbols depends on whether the compass needle points North, South, East, or West.

Does the Pirate Pays Megaways slot machine have a good return to players percentage?

Over the long term, for every 100.00 staked on the Pirates Pays Megaways slot, it returns 96.23 in prize money. That gives it a return to players percentage of 96.23%, which is about what we like to see from high volatility games like this.

Can I play the Pirate Pays Megaways slot on a mobile?

You can enjoy all of the style, gameplay, and features of the Pirate Pays Megaways slot machine on iPhones, iPads, Android, and Windows mobile phones and tablet computers.

What is the minimum wager on the Pirate Pays Megaways slot?

Is the Pirate Pays Megaways slot a good game?

We think the Pirate Pays Megways online slot is an excellent game, although there are no actual pirate symbols on the reels. It’s filled with exciting features, such as free spins with multipliers, and a varying number of ways to win.

The Pirate Pays Megaways slot comes from Australian developer, Big Time Gaming. Others in their successful range include Extra Chilli, Bonanza, and Danger High Voltage. As the original creator of the system, many of their games come in Megaways versions.

When was the Pirate Pays Megaways slot machine launched?