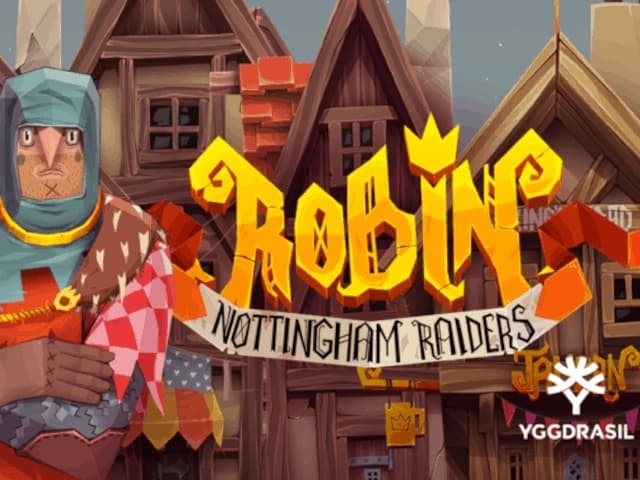 Yggdrasil has released a new title in collaboration with Peter & Sons, the second with the epic Robin Hood and his merry men in the main roles, called Robin Nottingham Raiders.

The minute you load Robin Nottingham Raiders slot, on any mobile or desktop device, you will be asked to choose the wager you’d want to place for your first spin, from 0.20 to 10 credits. As you enter the game, you’ll see the reels in the middle of the screen, and the Play/Autoplay button on the right.

Below the reels, you’ll see the control buttons and important displays. Going from left to right, you’ll see the three-bar button first. Click or tap on it, and you’ll see that you can turn the sounds of the game off or on, see the game rules and enter the paytable.

The low-paying will be symbols like swords, chicken legs, bows, batons, mugs, and arrows. The high-paying will be an iron-masked man, Friar Tuck, King John, Robin and Maid Marian. The blue coin will be the Wild, giving you one of the best payouts, of 25x the stake for the top combo. The Scatter, however, will be the highest-paying, giving you 100x the stake for a 5-of-a-kind combo.

As you leave the three-bar button, you see the Balance, Win and Bet displays, followed by the Quickspin button, which can be enabled or disabled on any of the top New Jersey and Pennsylvania slots sites.

Not much is happening in the base game of Robin Nottingham Raiders slot, other than the presence of the Wild, and its role as a substitute in the creation of winning combos.

Should you collect 9 Special Wilds, you will activate a Respin, with 9 Wilds placed on the panel at random. When you land at least 3 Scatters, not only do you get a payout, but you also win 15 Free Spins with panel Multipliers and Roaming Wilds.

During the Robin Nottingham Raiders bonus game, for every 3 collected Special Wilds, you get 3 extra Free Spins with 3 Roaming Wilds. 3 or more Wilds in the same reel add to a panel Multiplier. That reel they landed on will get a Multiplier of 2x or 3x. Their values are multiplied, if you get more than one Multiplier at once, and are applied to your win.

Yggdrasil’s Robin Nottingham Raiders is a highly volatile slot, offering an average RTP of 96.10%. The max payout potential it can deliver is 121,500x the stake.

Considering the max wager is relatively low, of only 10 credits, the max payout this slot offers is really mind-blowing. You could win 1,215,000 credits playing the game for such a small max wager. Incredible, really.

As introduced, Robin Nottingham Raiders is the second Robin Hood-inspired slot by Yggdrasil and Peter & Sons, so it is a sequel to Robin Sherwood Marauders. The sequel, of course, is far better than the original in terms of payouts, since it can make you a millionaire, while the original could only deliver 700,000 credits. In terms of visuals, they are both masterfully designed slots. So, if you’re in the search for massive wins, make sure you give the new title a try, as it will definitely be worth playing.

Can you trigger the Respin during the base game of Robin Nottingham Raiders slot?

Yes, as a matter of fact, you can. During the Free Spins, though, the chances of triggering the Respin are improved, as more Wilds are landing during the bonus game.

Robin Nottingham Raiders was developed by Peter & Sons, which is a YG Masters studio, having the right to use Yggdrasil's GATI technology to develop its slots for quicker distribution. But eventually, the slot was released by Yggdrasil, as a YG Masters title.

When was Robin Nottingham Raiders launched?

Yes. As Yggdrasil confirmed, Robin Nottingham Raiders is a highly volatile slot, capable of delivering excellent prizes in a blink of an eye.

Yes, it does. You get 15 Free Spins initially, upon the trigger, but as you progress through the bonus game and you land enough Wilds, you will be getting 3 extra Free Spins with 3 Roaming Wilds during them.

What online slots are similar to Robin Nottingham Raiders?

Robin Nottingham Raiders is the sequel to the original Robin Sherwood Marauders slot, also developed by Peter & Sons and launched by Yggdrasil. But there are plenty of other Robin-inspired slots across the industry, such as Play’n GO’s Riches of Robin and Red Tiger’s Robin Hood’s Wild Forest.

What is the max I could win playing Robin Nottingham Raiders slot?

The max you could win playing Robin Nottingham Raiders online slot is 121,500x the stake. Since the max wager level is 10 credits, it means you could scoop 1,215,000 credits playing the slot for the max wager.

No, this is not a jackpot slot, therefore, no jackpot pool is available. However, the slot can deliver a payout of over 1 million credits, therefore, it might as well be considered as a slot with a jackpot-like max payout potential.

Do I need to download Robin Nottingham Raiders slot?

No. Regardless of whether you want to play it on your smartphone, tablet or desktop device, you won't need to download it, because Robin Nottingham Raiders is an HTML5 slot, playable across all devices without the need of downloading any software.