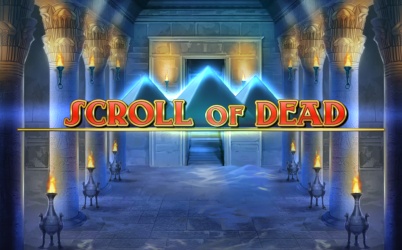 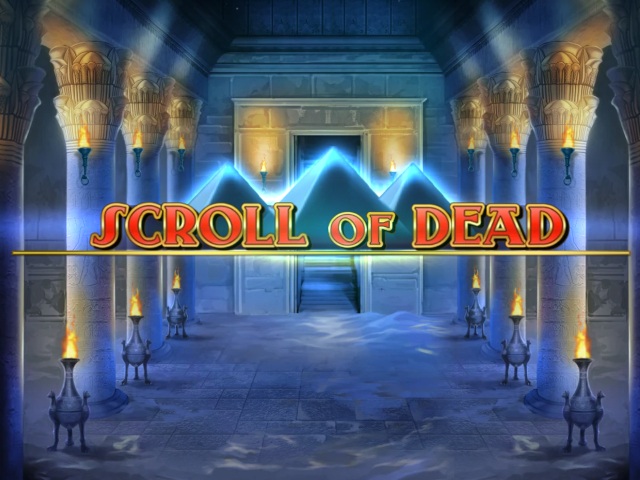 Play'n GO revisit ancient Egypt in their Scroll of Dead slot machine. This is a classic 5-reel, 10-line game, filled with Egyptian artefacts, and packed with features. A scarab beetle is a wild symbol that also unlocks a special free games round, with an extra reel and expanding symbol.

It’s available in desktop and mobile versions, so you can play on iOS, Android, and Windows devices without compromise.

Scroll of Dead has a high volatility matched with decent average returns of 96.28%. You can play for a wide range of stakes, winning up to 750,000.00 at the highest wager level. Take a gamble option on any win and you can boost this huge payout even further.

How to Play the Scroll of Dead Slots Game

Online casino games developer, Play’n GO are no strangers to the world of pharaohs, pyramids, and powerful gods, as they have numerous games themed around ancient Egypt. We can’t blame them, as it’s a hugely popular topic, and each uses outstanding artwork to bring this civilization to online casinos.

Play the Scroll of Dead slot and you encounter colorful playing card symbols, an ankh, golden snake, and the beautiful goddess, Shai. They sit within a gold-trimmed frame among the decorative columns of the palace. You’ll notice a sixth reel on the right side, wrapped in chains, and we’ll cover this in the next section.

By clicking arrow tabs on the Coin and Bet Level indictors, you can select a stake from 0.10 to 100.00 for each spin, or 0.01 to 10.00 on each of the 10 paylines at the best Pennsylvania and the best New Jersey slots sites. You can start the reels spinning on their own with a click on the arrows in a circle button, and open a paytable by pressing the ‘I’ tab.

The paytable lists how much you win whenever matching symbols land on adjacent reels from the left, with Shai paying the most, at 500x your wager for a full run of 5.

The blue and gold scarab beetle can substitute for any other if it’s in the right place to complete a win, or extend a run of matching symbols across more reels. This jeweled creature is also the scatter symbol of the Scroll of Dead online slot, and pays 2x, 20x, and 200x your wager when seen in any 3, 4, or 5 places.

It also awards 8 free spins, but before they begin, the sixth reel on the right unlocks. This gives you the potential for longer runs of winning symbols. The odds of winning during the free games gets a further boost from a randomly picked expanding symbol. This symbol stretches to fill any reel it lands on throughout the free spins feature and pays out even if it isn’t on adjacent reels.

The Scroll of Dead slot machine also has an optional gamble feature, although it’s only available during the base Slot Games. Take the gamble and you can double the value of a win by correctly guessing the color of a face-down playing card, or quadruple it by picking the right suit.

The sixth reel in the free games makes it possible to win 7,500x your wager from a screen full of the goddess symbol. That’s an impressive 750,000.00 at the maximum wager of 100.00 on the triggering spin. Like many Play’n GO slots, it’s a game with high volatility. Over the long-term it pays out at an average rate of 96.28%.

Our Scroll of Dead Slot Rating

This is a good-looking example of the ancient Egyptian theme. The golden symbols shine across desktop and mobile versions, and it comes with some decent bonus features. The classic ‘book’ mechanism, with expanding symbols in the free games, gets enhanced with that valuable sixth reel on the right.

If you are very lucky the game software picks Shai to expand on any reel she lands on during the round, making it easier to collect a massive win of 7,500x your total wager. See if the ancient gods of Egypt are with you when you play the Scroll of Dead slots game at the top New Jersey online casinos or the best Pennsylvania online casinos.

Where can I play the Scroll of Dead slot for cash prizes?

Follow our guide to the best online casinos which feature the Scroll of Dead slot and the rest of the Play’n GO range. These sites have the biggest and best welcome bonus deals, a wide selection of deposit and withdrawal options, and the security of a UK Gambling Commission license.

Is the Scroll of Dead slot compatible with my iPhone?

You can play the Scroll of Dead slot on an iPhone without any loss of features or functions from the desktop version. It also works on Android and Windows mobile smartphones and tablets. It uses HTML5 technology to ensure seamless mobile gameplay.

Does the Scroll of Dead slot have a free spins feature?

Yes, it does. You can trigger 8 free spins of the Scroll of Dead slots game, during which a couple of modifiers help you to collect big wins. A random symbol will expand across any reel it’s seen on, and pays in any places, while a sixth reel unlocks, so you can land longer winning combinations for higher payouts.

What is the maximum win from the Scroll of Dead slot machine?

If the Egyptian goddess fills all 18 symbol positions during the free games round, she returns a win equal to 7,500x your wager. That adds up to a huge 750,000.00 cash prize if you have 100.00 wager on the spin that triggers the free games feature.

What does the scarab beetle symbol do in the Scroll of Dead slot?

The scarab beetle symbol performs several important jobs in the Scroll of Dead slot machine. It’s a wild symbol which can act as others to complete wins, and also the scatter symbol, which pays prizes whenever it lands in any 3 or more places. It’s also the trigger for the free spins bonus round.

Is the Scroll of Dead slot machine part of a series?

The Scroll of Dead is a direct sequel to the Legacy of Dead slot from Play’n GO. There are several games with a similar style and topic in their extensive range, including huge successes like Book of Dead, and Rich Wilde and the Amulet of Dead.

Is the Scroll of Dead slot a reliable game?

You can trust the Scroll of Dead slot, and all other games we recommend, to deliver fair results from every spin. Random Number Generators determine where the reels come to a rest, and over the long term, the games return generous payouts.

How volatile is the Scroll of Dead online slot?

This is a high volatility game that Play’n GO rate at 9/10 on their own scale. You need to set a wager level that can withstand a few losing spins, one after another, although average prize values from the Scroll of Dead slot can be relatively high to make up for this.

Which developer created the Scroll of Dead slot?

The Scroll of Dead online slot is the work of Play’n GO. This is one of the biggest suppliers of online and mobile casino games, and it continues their reputation for delivering top-quality slots with exciting features.

When was the Scroll of Dead online slot released?

The Scroll of Dead slot machine was launched on 20th May 2021.