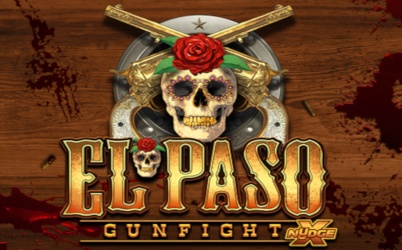 The El Paso Gunfight online slot from Nolimit City is themed around a real event that famously left ‘‘4 dead in 5 seconds.’’ It’s a beautifully-designed game filled with a variety of Wild Western characters, and packed with extras.

El Paso Gunfight is a desktop and mobile-compatible game where you can select high or extremely high volatility. Average returns come in at 96.06%, and there’s a potential maximum win of 2,222,000.00.

How to Play the El Paso Gunfight Slot

The outstanding graphics put you in the middle of the action, with the reels set against the bar of a Western saloon. It’s a 5-reel game that you can play in High Volatility mode with a 4-3-3-3-2 layout, or Extreme mode where the reels are in a 2-3-3-3-4 pattern.

Symbols and features remain the same, with silver and gold-effect playing card icons supplementing the high-value characters. Campbell, Hale, Krempkau, and a Bystander appear, each stacked to fill up to 3 rows on a reel. Marshall Stoudenmire is the star of the real event, and he’s a special wild symbol of the El Paso Gunfight slots game.

You can play on PCs, Android, iOS, and Windows mobiles for between 0.25 and 50.00 per spin at our recommended online casino sites. Click the $ emblem on the controls and you’ll see all of the wager options, The arrow tab activates an automatic spins feature and the lightning bolt speeds up the gameplay.

Press the 3 small dots on the controls and you see how much each symbol pays out when you match them across adjacent reels from the left. Campbell pays the most, at 0.4x, 1x, and 6x your total wager when he lands on 3, 4, or all 5 reels.

As well as having the power to act as other symbols, Marshall Stoudenmire can also multiply the value of any combination he completes. He’s what Nolimit City call an ‘xNudge’ wild and if necessary, will nudge up or down a reel until he’s fully in view. A win multiplier rises by 1x for each row nudged.

Land all characters at once and he’ll fill all 3 middle reels as the outer ones spin once more in the 4 Dead in 5 Seconds Respin feature. You’ll get guaranteed wins here.

The Deputy badge in any place transforms all lower-value card symbols into examples of the same type, and the Marshall badge does the same to any higher value characters in view. If both badges land at once, they extend the reels to a 4-3-3-3-4 layout before transforming their respective symbols.

Any 3 or more skull and gun scatter symbols award 8 free spins, during which they become extra wilds that jump around the reels. They double any xNudge wild payouts if they land in the same place as the Marshall.

If a badge is in view on the triggering spin, the free games upgrade and symbol transformations take place throughout.

The Drunken Gundfiguth&r…Spins looks like a spelling mistake, but that’s what this feature is called. It’s a series of 10 free spins with 5 wild symbols moving around, and xNudge wilds that stick in place for any remaining games. The reels expand to the 4-3-3-3-4 size, giving you an even better chance to claim plenty of wins before the games end.

A massive potential win multiplier of 44,440x your wager is possible. If you play the El Paso Gunfight slot at the highest stake of 50.00, you would claim a vast 2,222,000.00 for the ideal combination of symbols and multipliers.

Be aware that it’s a high, or extremely high volatility game, where the relatively infrequent winning spins are offset by comparatively high-value prizes. The average return to players percentage of 96.06% is about what we expect from highly volatile slots.

This is another top-quality release from Nolimit City. The El Paso Gunfight slot machine graphics help it to stand out on PCs and mobiles, and the impressive collection of features will ensure long-term success at the best online casinos.

Be sure to place wagers that can withstand the volatility, as you could endure several losing spins in a row before claiming a prize.

Can I play the El Paso Gunfight slot for free?

What is the maximum win from the El Paso Gunfight slots game?

What is the El Paso Gunfight slot machine themed around?

The El Paso Gunfight slot is themed around a real event that took place on April 14th, 1881. It’s known as the Four Dead in Five Seconds fight, and the game features several character symbols with the real names of those involved, such as Marshall Stoudenmire and Gus Krempkau.

Is The El Paso Gunfight slot a high volatility game?

This is a game where you can choose to play in High or Extreme volatility modes. It means that compared to other games, the El Paso Gunfight slot pays less often, but prizes tend to be higher in value. It’s an exciting mode, but you need to have a bankroll that can withstand several losses in a row.

What are the xNudge wilds used in the El Paso Gunfight online slot?

The Marshall is a wild symbol who can step in for others and complete wins if he’s in the right place. This is a stacked wild and if he isn’t fully in view, he will ‘nudge’ up or down, one row at a time. A win multiplier rises by 1x for each step, boosting the value of any combinations made with his help.

Does the El Paso Gunfight slots game have any other features?

The El Paso Gunfight slot is packed with bonus features. These include respins with guaranteed wins, free spins with sticky wilds, expanded reels, upgraded free games with symbol transformations, and more. If you like action-packed slots, look no further.

What games are similar to the El Paso Gunfight slot?

Wild Western-themed games are hugely popular, and there are many to choose from. Perhaps the most famous is the Dead or Alive slot and its sequel from NetEnt. These games have pin-sharp graphics, plenty of extra features, and the potential for big wins.

Is the El Paso Gunfight online slot compatible with mobiles?

Yes, it is. You can play the El Paso Gunfight slot machine on Android and Windows smartphones and tablets, as well as iPhones and iPads. The mobile version works in exactly the same way as the desktop game.

When was the El Paso Gunfight slots game released?