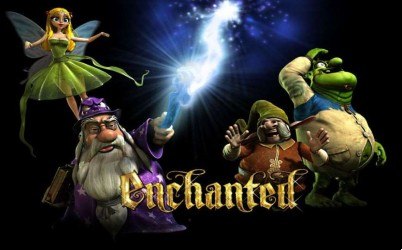 Take a trip through the land of mysterious lights in Betsoft's Enchanted slot machine where fairies, ogres, and prizes up to 600,000 coins per spin await anyone who plays for real cash. Before you try the game at one of our top online casinos, learn all about the extras and how you can trigger them by reading our full guide to this popular medium-variance slot.

Part of BetSoft’s collection of 3D slots, Enchanted offers punters a fully immersive gameplay that’s made more exciting by the studio’s unique cinematic bonuses and animated symbols. With 30 active paylines by your side and a mobile-optimized design that works on any device, this slot gives you plenty of ways to win money, no matter where you are.

If you are a fan of slot machines that can entertain you just as great as they can pay, this is your game. Built into this online pokie are not only two animated bonus features that you can unlock during the base game but also free spins rounds, a progressive jackpot, and an interactive bonus where you’ll get to fight against the ogre to win instant cash prizes.

How to play Enchanted Online Slot

Most of BetSoft’s slot machines are really easy to set up and play and Enchanted is no exception. Thanks to a whole set of buttons on your screen, you’ll be easily able to control any aspect of your playing, from adjusting your stake to automating your session. Start with the betting controls on your left side to choose your coins, the number of paylines, and the number of coins per payline you want to play. You have a full range of bets to choose from, from a minimum of just 0.01 credits per spin to a maximum of 150 credits.

What’s unusual about this slot is that it allows you to pre-select your paylines and choose which of them you want to keep active and pay for. You can view each payline by opening up the paytable through the “view pays” button where you’ll also find the list of paying symbols. There are nine different symbols that you can win payouts with, two of which also pay for two-of-a-kind prizes. All the prizes in the paytable are represented in coins and they vary when you bet more coins per payline. Play the slot for real money with one coin per line and the prizes will range from 2 to 5,000 coins per sequence. Bet the max bet (five coins per line), however, and you’ll not only be able to collect prizes of up to 20,000 coins per sequence, but you’ll also have a chance of winning the slot’s progressive jackpot.

If you want to, you can also play this slot on a smartphone or a tablet. Like any BetSoft slot game, Enchanted is compatible with iOS and Android mobile devices and it can be played in any screen orientation. To play the slot on your phone, firstly enter the game’s menu via the button on your top-left to adjust your bet and then just use the spin control to get started.

When it comes to collecting prizes, Enchanted by Betsoft pays just like any other slot machine does. To win some cash, you will need to get a sequence of two or more matching symbols on any active payline, beginning with the leftmost reel. But what’s different is that you’ll be able to choose which paylines you want to keep active and which you don’t want to pay for. However, keep in mind that deactivating any payline will make you ineligible for the progressive jackpot, which can only be won by collecting five wizard symbols while betting five coins per line and playing all 30 paylines.

Other than a progressive jackpot, this slot also packs two base-game bonus features and two secondary bonus side-games. The first bonus game is the free spins bonus and it is activated by three spellbook symbols on your screen. This bonus is also played with a special Enchanted symbol which can be collected on the middle position of the screen to win additional cash prizes. The second bonus, on the other hand, is a cinematic feature where you’ll get to control the fairy and attack the ogre to win various cash prizes. You can trigger this feature by collecting a fairy and ogre symbols side-by-side on any active payline.

As for the base-game extras, they can be triggered by collecting 3 golden key symbols on the fifth reel or by collecting two or more hat symbols anywhere on the screen, respectively. The first feature creates mystery doors on the reels which can be unlocked for instant payouts while the second feature has the magical hat spin across the screen to rearrange icons for a new win.

In short, Enchanted is a slot machine for players who like modern, bonus-packed games that offer medium-variance gameplay. With extras like a progressive jackpot, free spins rounds, and more, this slot can certainly let you earn some solid profits while playing for real cash up to 600,000 coins per spin. However, judging by the high hit rate of the game, it is likely that you’ll get more of the smaller payouts throughout your session rather than any wins that are as big.

If you like your slots to be more volatile with their prizes, however, you can also try out some of the high-variance games from BetSoft. The Good Girl Bad Girl slot gives you immersive gameplay and payouts of over 1,000,000 credits but you also have slots like Stampede and Blood Eternal that are just as popular with slot players who don’t mind the extra risk. Head down to any of the best online slots sites to play these slots for real money and collect a lucrative welcome bonus after you create a new account.