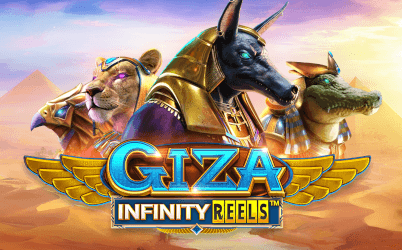 On 23rd November, Yggdrasil Gaming launches an innovative new slots game at online and mobile casino sites. Giza Infinity Reels will feature stunning images of Egyptian gods, across 3 reels. On any win, the number of reels begins to grow, with no upper limit. This medium to high volatility game is due to have average payouts of 96.45%, and you’ll be able to play for a wide range of stakes.

The high standard of artwork and hugely popular topic are just a couple of reasons why the Giza Infinity Reels slot is so widely anticipated once released at the top online slots sites. The gameplay is another good reason, with an ingenious mechanism that can lead to multiple reels across the screen for huge payouts.

Win multipliers will grow along with the reels, leading to potential prizes of 10,000x your stake. During a free games round, multipliers won’t reset after a losing spin.

You will be able to enjoy this exciting game on PCs as well as mobiles running the iOS, Android, and Windows operating systems.

How to Play Giza Infinity Reels

The detailed images of Anubis, Bastet, and other Ancient gods share the reels with scarab beetles, the Eye of Horus, and other classic symbols. The scarab is also a wild symbol that acts as others if needed.

Despite the innovative gameplay, Giza Infinity Reels is set to use the standard Yggdrasil controls to make it easy to set up and give you a decent wager range. Available stakes will be from 0.25 to 25.00 per spin at the online casinos, although this maximum could be a little low for some.

It will come with the option to spin the reels automatically, and you can open a paytable to see what each symbol pays out. Each time you land a win, one extra reel is added to the game, and if the same symbol is on the new reel, the process repeats. This can go on and on, with prizes paid out once you see a reel without the triggering symbol on it.

For each new reel, a win multiplier on the eventual payout rises by 1x. There’s also a bonus win of 888x your stake for getting a run of 12 reels.

Any win with the pyramid symbol launches 10 free spins. During this round, the multiplier won’t reset at the end of an Infinity Reels feature, instead decreasing by 1x. The maximum 5x multiplier could lead to some vast payouts. You will also be able to gamble the free spins winnings for a prize multiplier of up to 10,000x your stake.

The maximum prize of 10,000x your stake equals 250,000.00 at the highest wager level. Giza Infinity Reels is due to come with a medium to high volatility and average return to players percentage of 96.45%.

This game will be hugely popular as soon as it’s launched. The topic of Ancient Egypt always attracts a vast fanbase and the Infinity Reels system is an innovation that can create big wins from small stakes.

You can start playing the Giza Infinity Reels slot at our recommended online slots sites from 23rd November.