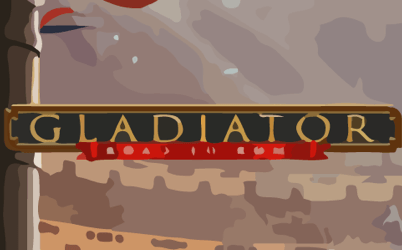 Gladiator: Road to Rome is a progressive jackpot slot based loosely on the Hollywood epic starring Russell Crowe. The Aussie actor doesn’t actually feature on the reels here, but there’s still plenty of room for Joaquin Phoenix, Oliver Reed and other assorted characters from the 2000 movie.

The folks at Playtech know when they're onto a good thing and have been feverishly working away behind the scenes on the third instalment of their successful Gladiator online slot game series. The result is Road to Rome, a progressive jackpot slot based loosely on the Hollywood epic starring Russell Crowe. The Aussie actor doesn’t actually feature on the reels here, but there’s still plenty of room for Joaquin Phoenix, Oliver Reed and other assorted characters from the 2000 movie. Road to Rome is linked to a progressive jackpot, giving players a chance to win a huge sum of cash, and features enough bonus rounds and features to keep the average player coming back for more. So dust off your shield and polish your sword… we’re heading back into the Colosseum.

Gladiator Road to Rome features 25 paylines and myriad ways to win with each spin of the five reels. The basic symbols are characters from the movie and icons that represent items you’d expect to find a Roman warrior wearing, like armour, shields and helmets. Fans of the previous Gladiator titles from Playtech will be familiar with the fast-paced action and the atmosphere created by the theatrical visuals and sharp bursts of sound which greet every winning combination spun. Road to Rome takes those aspects to the next level with 3D graphics and a whole new soundtrack.

Road to Rome utilises a number of special symbols, not least the wild – which can substitute for all others apart from the scatter for a top prize of 40x your stake. The scatter is the trigger for the Colosseum Free Games round should three or more of these land on your reels. There are some incredible opportunities to win big with Gladiator Road to Rome. It's linked to Playtech’s progressive jackpot network, for starters, which could lead to a rather handsome payday. Even aside from the progressive payout a top prize of 45,000x your stake can be won here.

The shield scatter symbol triggers the free spins bonus: three scatters earns five freebies, four scatters gives eight free spins and the full set of five pays a dozen free ones. Players are then taken inside the Colosseum for a "pick 'em"-style feature. Numerous shields will be displayed on screen and your job is to pick your favourites to reveal cash prizes and other goodies, which include multipliers, nudges, payout boosts, extra free spins and more. Here’s a quick rundown of what's up for grabs in the Colosseum Free Spins round:

The free spins then play out according to the features earned as above, so there's an opportunity to achieve a 9x multiplier on 12 free spins. There is one final special symbol to consider: the helmet bonus. Land three of these on the middle trio of reels and you'll trigger the Gladiator Bonus feature. Here nine helmet symbols are picked for you, with bronze, silver and gold available – gold is, naturally, the biggest earner. If all nine helmets are gold you will win the progressive jackpot!