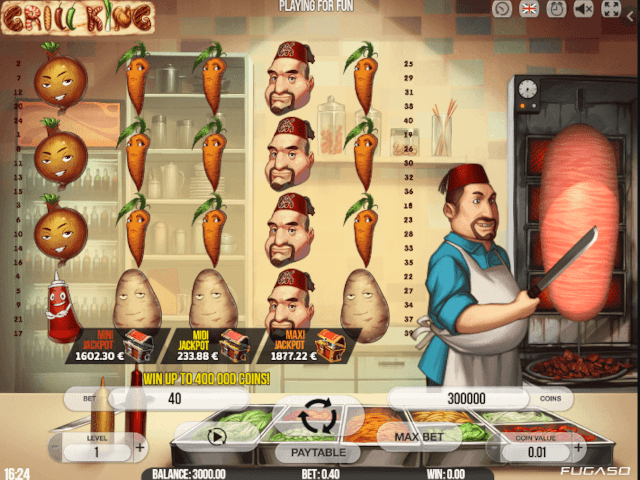 Like all of Fugaso’s games, the Grill King slot comes with HD graphics, catchy music, and a presentation that immerses you fully right from the first spin. But what keeps you more interested in playing than any visual appeal is the game’s free respin feature, which always gives you a new chance of hitting a payout. Learn more about the prizes, hidden features, and wagering limits of the slot when you read through our detailed review of the game, playable at all of our recommended online casino sites.

Grill King by Fugaso is really easy to play, just like all of the studio’s slot games. Before you start spinning, you just have to choose a coin value you want to play with and then how many coins you want to wager per payline (up to 10). You can do this by using the clear controls on your left and right, which can take you from a minimum wager of 0.40 credits per round to a max wager of 200 credits per spin in only a few seconds.

When you pull the paytable out with the button underneath your spin control, you’ll find 11 symbols that offer prizes which are given in coins. There are 40 paylines to trigger a payout on and they can all be seen by pressing the numbers found on each side of the reels. While playing for real money with one coin per line, there are prizes ranging from 2 to 1,000 coins to be collected per a single combination of symbols. Wager up to 10 coins per line and you can enjoy even higher wins, the maximum being a staggering prize of 400,000 coins. And thanks to the slot’s unusual respin feature, any prize won here can lead to even more money, as explained in the section below.

Even if you want to play on the go, you can still enjoy the Grill King slot machine thanks to Fugaso’s mobile-friendly version of the game. The mobile slot is available for playing on iOS and Android devices alike at the top rated mobile casinos, and even on older smartphones and tablets. When playing on the move, you’ll get large spin buttons to control your rounds but all of your other controls will have to be accessed via the special menu button on your bottom right.

While you’re spinning away at the top online slots sites, you’ll mostly be waiting for three or more identical symbols to land on some of the 40 paylines, beginning with the first reel on the left. This is especially true for the ketchup and mayonnaise bottles which can pay the biggest prizes for five-of-a-kind wins. Another icon you’ll be hoping to see often is the chef, which serves as the wild symbol in the game. This symbol can substitute for all available symbols to trigger a prize, but he only appears on reels 2 and 4.

No matter what type of payout you trigger, the Grill King slot machine will always give you another chance to win some money with its built-in respin feature. This feature is activated after a prize is collected and it gives you one free respin to play. During the respin, the winning symbols that triggered the feature will be given to you once again stacked on a reel, but every other symbol on the screen will be replaced.

And finally, you also have Fugaso’s jackpot prizes to hope for when playing for real cash. Like all jackpot slots from the studio, Grill King has Mini, Midi, and Maxi prizes, each pooled with a different percentage of your wager. These prizes all pay different amounts of money and they can all be won randomly during any spin.

Even when you play for real money using a single coin, you can bank payouts of up to 40,000 coins, which may not be an exception here considering the game has a low hit rate. On top of that, you have three progressive jackpots to win. The RTP is slightly lower than we like to see with online slots, at 95.7%. The prizes on offer may not be as high as Microgaming’s or NetEnt’s jackpots, but they can still be worth your time.

Grill King is another entertaining mid-variance slot from Fugaso that can fit any budget, no matter how big or small. As such, this slot can appeal to a variety of punters looking for modern slot machines that that can pay solid prizes without involving too much risk.

For something with a higher hit rate and the same entertainment value, you can also check out other slots from Fugaso like Fear the Zombies. Inspired by the Walking Dead series, this immersive slot features payout multipliers, free spins bonus games, and a cascading reels feature that could lead to bonus payouts after every win. Another slot machine that pays more frequently is Fugaso’s Goblin’s Land slot, which features 2-symbol payouts, free spins games, and even a classic gamble function. For even more lucrative slots from the game studio, you can take a look at some of the casino operators featured on our site, where both real money games and free slot machines can be played at any time of the day.