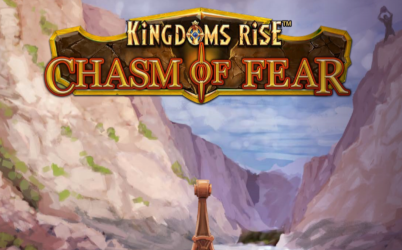 Playtech real money slot games have always been among the most popular in online casinos. The newest release, Kingdoms Rise: Chasm of Fear, should continue Playtech Origins’ run of success with the Kingdoms Rise franchise.

An action- and fun-filled slot from the same company that brought us games such as Age of the Gods: Furious 4, the Kingdoms Rise: Chasm of Fear slot machine offers stunning winning potential in 4,096 different ways.

The slot has trademark high-quality Playtech Origins graphics and an intriguing theme paired with high-prized gameplay. Just like the other entries in the Kingdoms Rise franchise, Chasm of Fear will expand on the story elements and offer familiar, yet exciting gameplay.

Fans of Playtech slots will be well familiar with the gameplay on offer. In short, the company offers something for every level, but Kingdoms Rise: Chasm of Fear is a high-volatility online slot.

Other Playtech offerings give more hints as to what might be in store for the company’s newest entry in the online slot market. Age of the Gods: God of Storms has 25 paylines, 5 reels and a wide range of wagering options, from a 0.25 minimum wager to a 500.00 maximum wager.

On the other hand, Legacy of the Wild offers a lower maximum wager and fewer freebies but it also has 40 paylines, giving real money slots players more chances to win per spin.

Features to Keep an Eye Out for in Kingdoms Rise: Chasm of Fear

Players at top online slots sites know what they can expect from a Playtech Origins game. In particular, the Kingdoms Rise franchise became popular because of the progressive jackpots that boosted each slot game’s winning potential. The latest entry in the series, Chasm of Fear, is not different.

In the Kingdoms Rise: Chasm of Fear 5-reel slot, giants throw boulders at your ship. Those big rocks can add extra symbol positions in Reels 2, 3 and 4 and that will trigger free re-spins. In addition to free spins, this online slot also has a Kingdoms Rise Jackpot. As a matter of fact, it has three.

You can see all the jackpots stacked on the left. For more information on how to hit them, you can consult the game’s guide. Of course, if you want to land any of them, you’ll need to play for cash.

Kingdoms Rise: Chasm of Fear is a high-variance online slot, so high rollers will probably get the action they are looking for. Just like most entries in the Kingdoms Rise franchise, Chasm of Fear’s RTP is 96%.

That’s middling, to say the least, but let’s not forget about the three progressive jackpots. Each of them greatly increases the slot machine’s winning potential and makes Kingdoms Rise: Chasm of Fear all the more exciting. With variable wager sizes and three jackpots on offer, the slot game is a great choice for new players and high rollers alike.

Playtech Origins has so far released plenty of games that fans of playing slots for real money have enjoyed. Kingdoms Rise: Chasm of Fear will surely heat your summer up with its three progressive jackpots and excellent gameplay. If you loved the other entries in the series, you’re going to love this one as well.

If you’re looking for alternatives, the other Kingdoms Rise slots are a great choice. Another example would be Monty Python’s Spamalot – its light tone paired with a very serious 1,000 maximum wager and progressive jackpot make it worth your time. If you want a more serious, darker tone, you can go with Battle of the Gods.

Check out Kingdoms Rise: Chasm of Fear at one of our recommended online casino sites and play with a bonus for a chance to win without spending real money.