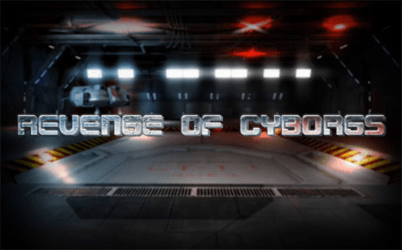 Welcome to the future where humans war with cyborgs in the far reaches of the universe for a slice of glory and big bags of cash. At least that’s the story you’ll witness first-hand when you play the new sci-fi slot Revenge of Cyborgs by Fugaso. Learn how these bonuses can be won by reading our full Revenge of Cyborgs online slot review.

Play Revenge of Cyborgs For Free! 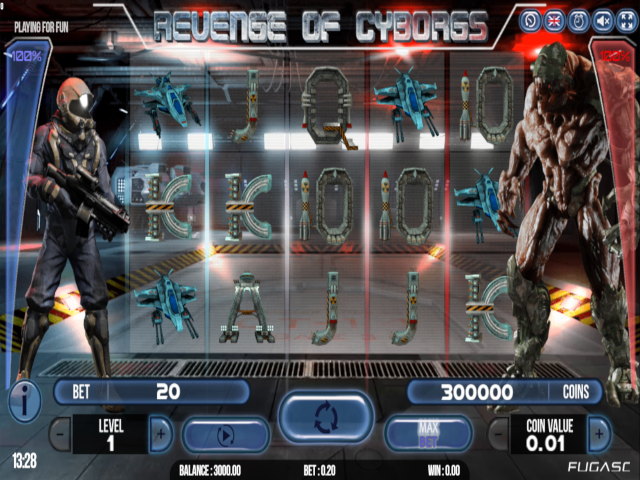 Playable on any desktop or mobile device, Revenge of Cyborgs brings 5 reels and 20 fixed paylines of pure high-variance gameplay that’s enlivened with stimulating animations, epic battles, and high-paying symbols. When played for real money, this slot can produce payouts of up to 50,000 coins and that’s without the help of any bonus features. Get to the free spins rounds, though, and you can have all your payouts doubled but also enjoy other bonus features like sticky wilds and both-ways-to-win mechanics.

Due to its simple controls, Revenge of Cyborgs can be played without any hassle even by players with little experience in online slot games. Before you begin, you will have to choose a coin value you want to play with but also select whether you want to bet one or more coins per line. By using the easy screen controls, you can pick from a broad range of bets, from a minimum of 0.20 credits to a max bet of 200 credits per round.

The slot features 20 fixed paylines you can trigger payouts on, all of which can be seen only by listing through the pay table. Prizes can be won with a total of 11 symbols which have payouts that are given in coins. Playing for real cash with only a single coin per line will offer you a range of payouts that starts at 2 coins for three symbols and ends at 250 coins for five matched icons. Increasing the number of coins will multiply these payouts even further, giving you a max win of 2,500 coins per combination. But what’s out of the ordinary in this slot game is that it can change from a left-to-right game to a both-ways-to-win slot machine, giving you even more opportunities to make a profit.

And if you want to play this online slot on a smartphone, you will get the same smooth experience you can enjoy on a computer but with stripped-down playing controls. The Revenge of Cyborgs online slot for mobile works on Android and iOS units alike but it can be played only when you rotate your device to horizontal mode. The slot gives you on-screen buttons to control your rounds when going mobile but your bet controls will be hidden inside the game’s menu.

Revenge of Cyborgs Gameplay and Bonuses

As the battle between humans and cyborgs ensues on the screen, you’ll be waiting for at least three matching symbols to form a sequence on one or more paylines, beginning at the first reel on your left. The highest-paying icons are the spaceship symbols and they come in six different forms and two colours. But the ones you’ll get even more excited about are the red and blue planets, which not only act as the wild symbols but they can also activate all of the game’s bonus features.

The bonuses start with the planet re-spins, which are triggered by a red planet wild symbol appearing on reel five or a blue planet wild symbol appearing on reel one. If the red planet appears, it will trigger a re-spins feature during which the symbol will shift positions towards the left and the cyborg will attack the human, losing health with each new spin. The blue planet triggers the same feature, only it moves towards the right and has the human losing health by attacking the cyborg. If any of the two health meters drops to zero, the slot will trigger 15 free spins bonus games.

During the cyborg free spins, the slot will turn any red spaceship that appears on the reels into a sticky wild that remains in place for the entire duration of the bonus, but also give you both ways to win prizes. The human free spins, on the other hand, turn the blue spaceships into sticky wilds and give you a multiplier of 2x instead.

Revenge of Cyborgs is one of Fugaso’s finest works, offering unbeatable entertainment and exciting bonus rewards. If you’re looking for creative slot games that can be played on any budget and still pay good prizes, this slot is worth adding to your list. Play with real cash and you may be lucky enough to get payouts of up to 50,000 coins, and more should you activate some of the bonus features. Being a high-variance slot machine with a low hit ratio, Revenge of Cyborgs can definitely pay well, although it isn’t a slot meant for punters who like to play with minimal risk.

If you’re interested in slots that pay in a more balanced way, feel free to take a look at other slots from Fugaso that offer medium-variance gameplay. Gates of Hell is practically the same slot machine but with demons, priests, and less volatile payouts. Another mid-variance slot from the studio that features on-screen fights is Knockout: the Last Fight, which also comes with three progressive jackpot prizes you won’t get in Revenge of Cyborgs. You can find even more great slots from Fugaso that you can try out for free at our slots page, along with other top games from today’s top-ranking game makers like Yggdrasil.