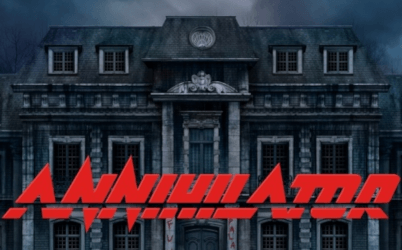 The Annihilator online slot powered by Play'n Go will rock your world as you grind the mighty ax of the Rock/Heavy Metal group lead guitarist Jeff Waters. The 5-reel slot machine with 10 paylines game features the Waters and the music of the Canadian Rock/Heavy Metal band that shares the name of this game. You can jam with Waters and rock for some heavy cash. The medium-to-high variance Annihilator game has an RTP rate of 96.2%. Try the Annihilator online slot and check out all the features you want for free.

Like many top real money slots, Annihilator provides the experienced or novice player a chance to win on multiple different. All payouts must begin the first reel and move from right to left. The game features a very basic setup that allows you to figure out how you can win. The line wagers range from $0.10 all the way up to $100. Annihilator delivers a top jackpot of 5,000x the line wager, which would mean a top potential payout of $500,000.

The Annihilator online slot from Play'n Go will pay players top online slots sites who hit on five symbols 40x their stake. And if you hit Waters and the bonus features, you can cash in on maximum of 5,000x your stake.