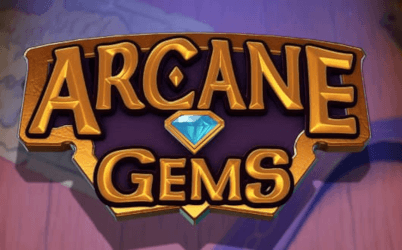 The Arcane Gems online slot from Quickspin is a medium-variance game with a 96.05% RTP and a max payout of 5,625x your stake, or 562,500 real money slot credits with a max bet. This Quickspin online slot features unusual Arcane Lock Mechanics and Arcane Multipliers to increase your chances of winning. Read our Gambling.com review below for information on Arcane Gems’ compatibility, features and gameplay.

The graphics are fine in this Quickspin online slot game and the soundtrack is soothing if you like classical music.

The screen is pretty simple in the Arcane Gems online slot, especially for anyone with even a little experience at using the best online casino sites to play. Use the big circular button on the far right to spin. Immediately to the left are two smaller buttons. On top is a circular button to enact Autoplay lets you choose as few as 10 and as many as 1,000 automatic spins. Below this is a double arrow which lets you use Turbo mode.

One of the most noticeable features in this game is the Arcane Multipliers, something users at the top online slot sites will not see every day.

The Arcane Gems online slot is fully compatible for players who like to take slot spins using their mobile devices. This real money Quickspin slot game is available in versions set up for Android and iOS devices, including tablets and phones, in addition to the desktop rendition.

The Arcane Gems slot has an RTP of 96.05% in a medium-variance game. The maximum win is 5,625 times your bet for a max jackpot of 562,500 credits. This is a solid max win though some other titles by Quickspin offer even more, such as the Diamond Duke online slot with its possible 800,000 credit prize.

Is Arcane Gems a Good Online Slot to Play?

Arcane Gems is a medium-volatility slot that is easy to understand and thus holds some appeal to players just beginning to use online slots to play for real money. The max payout 562,500 credits might attract some high rollers, but others might want to check out other options.

For them, Quickspin offers the Nero’s Fortune online slot with a similar RTP (96.24%) and a max payout of 857,500 credits. See Gambling.com for online casino bonuses and reviews on hundreds of other slot titles from various manufacturers.